Share All sharing options for: Cubs Historic Photos: Seventh In A Series

There are a number of color photos in the set I got from Leo Bauby; this is the first of several I hope to post.

I'll give you the identity of the three players in this photo; it should be fairly easy, with a little digging, to figure out when it was taken. They are: Bill Bonham, Vic Harris and Billy Williams. 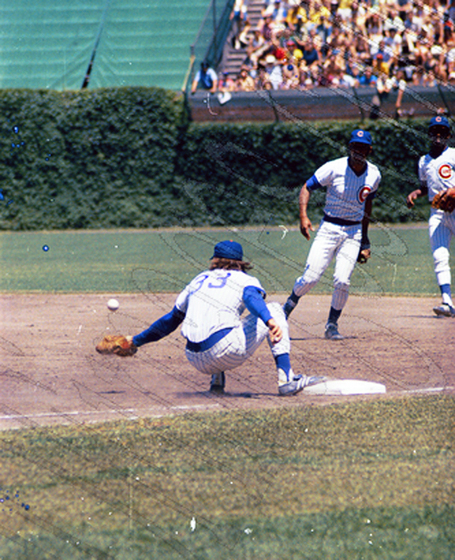 The players involved should have been enough to figure this out. Harris, acquired as part of the Bill Madlock deal from Texas, was supposed to be the Cubs' 2B for years to come; he was only 24, and though that .659 OPS doesn't look great from a 2009 standpoint, remember that middle infielders in that era weren't expected to hit. As it turned out, Harris really couldn't hit at all; he put up Aaron Miles-like stats in 1974 and played only five games at 2B in 1975 before being shipped to the Cardinals after that season for Mick Kelleher.

Billy Williams had started playing 1B in 1973 after his outfield mobility was reduced and played more games there than in the OF in '74. After '74 he was traded to Oakland, so it has to be a 1974 game.

With the ivy in full bloom and shirtless fans in the bleachers, it had to be a summer game. All three of these players played in only two games at Wrigley in June, July or August, 1974: a 9-4 loss to the Padres on June 18 and a 4-1 win over the Braves in the first game of a DH on July 5.

So what's this play? It appears to be an error on Bonham, but neither Bonham nor Harris made an error in either game. Williams did err in both games, but his error in the June 18 game is listed as a "catch"; the July 5 error says "ground ball". So this must be a play in the top of the fifth inning of the July 5 game, where Billy misdirected a throw to Bonham on a ground ball by Darrell Evans. It led to the only Braves run of the game (unearned). (Also giving a clue that it was the July date: it was 69 degrees on June 18, 78 degrees on July 5.)

Also of note in this photo: you can see clearly the large sheets of Astroturf that the Cubs used to cover the center field bleachers during most of the 1970's, and the fact that the HR basket only was in front of bleachers where people actually sat; in that era it was not in CF, nor was it past the LF or RF wells, where there were no seats at that time.