Share All sharing options for: Cubs Historic Photos: Eighth In A Series

Looking at this photo, you'd think it would be almost impossible to figure out when it was taken. And you're right -- there aren't many clues, but there are enough to at least pinpoint the date, if not the inning. 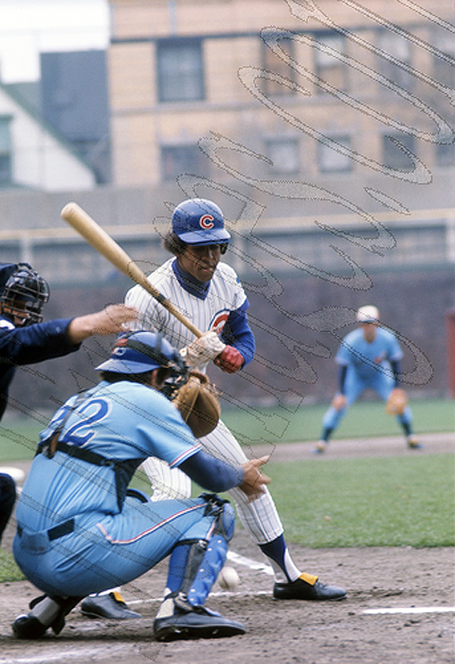 The key clue in the photo is the catcher. In the era when this photo was taken -- clearly from 1972-77, the years Jose Cardenal played for the Cubs, John Boccabella was the Expos' primary catcher.

But that's not Boccabella -- it's Terry Humphrey, who was an Expos backup catcher from 1971-74. He played in only two Wrigley Field games that Cardenal also played in -- April 7, 1973 and the second game of a doubleheader on April 13, 1974 (I was actually at that doubleheader).

So which is it? It looks cold in the photo, and I can tell you from having been at the 1974 doubleheader that I remember it as being sunny (and 61 degrees, according to the boxscore).

Thus, this photo was taken on April 7, 1973, a game in which the Cubs blew a 2-0 sixth-inning lead but won 3-2 in 10 innings on a walkoff single by Ron Santo. It's impossible to tell which of Cardenal's at-bats this is; you can't see the pitcher or anyone else on the field except plate umpire Bill Williams and Expos SS Tim Foli, wearing that red-white-and-blue Expos beanie.