'Twas The Night Before Cub Christmas

Share All sharing options for: 'Twas The Night Before Cub Christmas 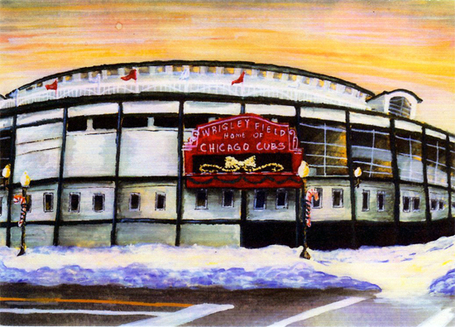 'Twas the night 'fore Cub Christmas, and all through the hold
Not a creature was stirring, not even Sam Fuld;
Cub fans' wishes were hung by the bleachers with care,
In hopes that St. Hendry soon would be there;

Tom Ricketts was nestled all snug in his bed,
While visions of championships danced in his head;
And Lou in his uniform, Rudy in low-billed cap,
Had just settled down for a long winter's nap.

When out on the field there arose such a clatter,
Lou sprang from the bed to see what was the matter.
Away to the window he flew like a flash,
Tore open the shutters and threw up the sash.

The moon shining down on the skating rink there
Gave the lustre of mid-day to all in the air.
But then, it appeared, as if in a dream:
A blue and white sleigh carrying his baseball team!

With a big old driver, so lively, not slim,
I knew in a moment it must be St. Jim.
More swift than Z's fastball his players they came,
And he whistled, and shouted, and called them by name;

The dry leaves that fall from the ivy walls die,
When they start to grow, Marmol's slider will fly,
And over on a rooftop there's the Gorz and the Shark,
In '10 they'll try to keep the ball in the park.

And then, in a twinkling, as if that weren't enough
Tom Ricketts announced that we'd keep the troughs.
And what did Jim get from his trip to Indy?
Not much, sad to say -- just Mike Parisi.

Sori gave a hop so we'd see his knee's fine;
It certainly wasn't in two-thousand-nine.
That Gatorade cooler? Z and Demp beat it about,
So much that it was banished from the dugout.

Ticket prices are up -- more cash for the vault
Jim has to make trades -- o'erwise he's at fault
His droll little mouth was drawn up like a bow,
Where's Matt Holliday going? We do not yet know;

We feel bad for Santo, still not in the Hall,
But perhaps next month, Andre Dawson gets that call.

Jim had a broad face and a little round belly,
That shook, when he laughed like a bowlful of jelly.
He was chubby and plump, a right jolly old elf,
And I laughed when I saw him, in spite of myself;

This year, the TWO stanzas above stay as they are. Anyway:

A wink of his eye and a twist of his head,
Soon gave us to know we had nothing to dread;

He spoke not to us, but went straight to his cell,
And filled up the roster; then gave out a yell:
"Milt Bradley is gone; don't worry 'bout the 'pen;
I'll give you a club that can win in '10!"

He sprang to his sleigh, to his team gave a call,
And we heard Demp say again, "We will win it all!"
Then we heard Jim exclaim, ere he drove out of sight,

"Happy Christmas to all, and to all a good night."