Share All sharing options for: Cubs Historic Photos: Ninth In A Series

Instead of game action, your assignment today is to guess who this player is and what date this photo was taken.

Your only clues are: this was taken on the day of a special event at Wrigley Field, and the player pictured was not part of that event.

Those clues, plus the scoreboard, should help you figure it out. 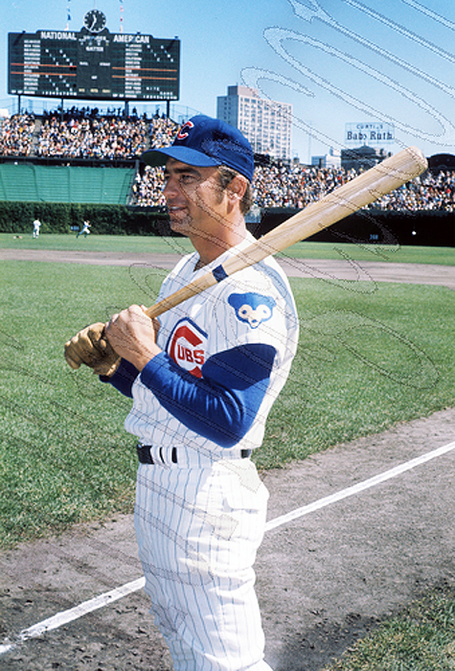 It's funny how the way people looked years ago, or at least the way they look to us decades later, makes them look to us now, far older than they really were. The photo is of Cubs outfielder Johnny Callison, who was 32 years old when this photo was taken on August 28, 1971 at Wrigley Field. To me, he looks quite a bit older than 32.

Callison was acquired, as were many in the 1950's, 1960's and early 1970's, far past their primes for other teams. He had been a three-time All-Star for the Phillies in the early and mid '60s, finished 2nd in MVP voting in 1964, and that year hit a three-run walkoff homer to win the All-Star Game for the National League. (Remember, looking at his numbers from that year from a 2009 perspective, they don't look so great, but the 1960's were a lower-offense era.)

By the time the Cubs got him from the Phillies in March 1970 for Oscar Gamble and Dick Selma, he was pretty well washed up. He had a league-average 101 OPS+ year for the Cubs in 1970 and was awful in 1971, hitting .210/.298/.341 and by the end of the year often being benched for Jim Hickman. He did play that day, going 1-for-3 with a double, a walk and two RBI. In the 1971-72 offseason he was dumped to the Yankees for a PTBNL, who turned out to be reliever Jack Aker, another player past his prime (although he had a decent '72, finishing tied for sixth in the NL with 17 saves). The Cubs would have been better off keeping Gamble.

What was the special event on August 28, 1971? Ron Santo Day, to honor the Cubs' longtime third baseman; on that day he first revealed publicly his battle with juvenile diabetes. You can read more about that and Santo's life in the BCB Top 100 profile of Santo.

The Cubs lost the game to the Braves 4-3, in what was a matchup of future Hall of Famers -- Phil Niekro vs. Fergie Jenkins. Jenkins was 20-11 after that game; he wound up 24-13 and won the Cy Young Award. The 24 wins matches Larry Jackson (1964) for the most wins by a Cubs pitcher since 1927 (Charlie Root won 26 that year). Since 1971 three Cubs pitchers (Jenkins, 1972; Rick Reuschel, 1977; Greg Maddux, 1992; Jon Lieber, 2001) have won exactly 20 games, none has won more. If you enlarge the photo enough, you can see SOX/DETROIT on the righthand side, and matching up the other games that day, you could have figured out the date from the scoreboard alone.

You can order high-quality prints of this photo, and all the photos in this series, by emailing Leo Bauby.