Share All sharing options for: Cubs Historic Photos: Tenth In A Series

This one's a little cryptic, and the first Cubs road game to be featured in this series. The identity of one of the players in this photo should be obvious, and if you think about it and the numbering style of the other team, you should be able to figure out when this was taken. 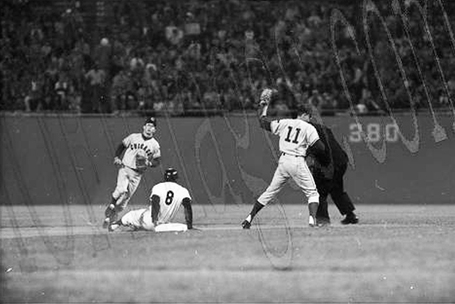 The stadium in question is Dodger Stadium -- although they have retired number banners and ads on the outfield wall now, that was the only ballpark at the time to have those sorts of numbers on the walls. At the time Dodger Stadium was only in its fourth season; it is now the third-oldest park in the major leagues, 48 years old in 2010.

The identifiable Cub is, clearly, Don Kessinger. After a brief callup in 1964, he had been recalled in June 1965 and installed as the starting SS, not quite 23 years old. The Cubs played the Dodgers in LA in only two series after Kessinger's recall; the second "series" -- really, only one game -- was Sandy Koufax's perfect game on September 9. But the Dodger in that photo -- John Roseboro, who wore #8 for LA that year -- didn't play in the perfect game; that game was caught by Jeff Torborg.

So it has to be the other series, from July 15-18. Roseboro played in all four games of that series, but was retired at second base only once in the series: he was caught stealing to end the bottom of the third inning by Cubs catcher Ed Bailey in the first game of that series on July 15. Glenn Beckert, also a 1965 rookie, is the other Cub in the photo. Beckert and Kessinger, of course, would make up the Cubs' double play combination for nine seasons, from 1965-73, until Beckert was traded to the Padres after the 1973 season.

The Cubs lost that game anyway, 5-0; Don Drysdale threw a three-hit shutout, one of 18 times the Cubs were shut out on their way to a 90-loss season. The Dodgers, of course, won the 1965 NL pennant and World Series.