Share All sharing options for: Cubs Historic Photos: 11th In A Series

There aren't really enough clues in this photo to determine the date, though I think you could probably make an educated guess. The identity of the hitter should be pretty obvious -- go past the jump to find out when it was taken. 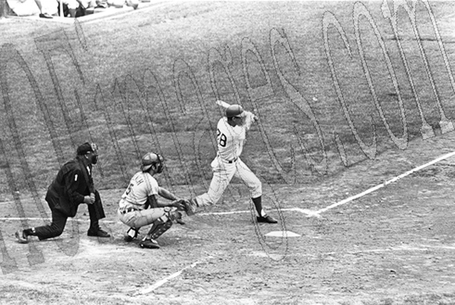 The hitter is Jim Hickman and the photo was taken on July 23, 1970. Hickman, though always a good hitter, was never at All-Star level -- except in 1970, one of the bigger fluke seasons in recent major league history. He set career highs that year -- by huge margins -- in runs, HR, RBI, doubles, walks and OPS. His 1.001 OPS was third in the National League, he made the All-Star team for the only time in his career, and finished eighth in MVP voting.

You may remember the famous collision at home plate in the 1970 All-Star Game between Pete Rose and Ray Fosse; it broke Fosse's collarbone and he was never quite the same player after that. It was Hickman who got the hit that drove Rose in on that play in the 12th inning.

On July 23, 1970, the Cubs beat the Reds 1-0. Milt Pappas, acquired one month earlier, was making only his sixth Cub appearance (fifth start). He threw a four-hit shutout and appeared to be a godsend -- he had posted a 1.29 ERA in those six outings. The only run in the game was unearned, scoring on a throwing error. Hickman was 1-for-2 with a walk in the game; the photo may have been taken in the seventh inning when he got that hit, but it's impossible to tell.

The 1970 Cubs had a fair amount of bad luck. Their Pythagorean projection was for a 94-68 record; they actually won ten fewer games. They scored almost 100 more runs than they did in 1969, but still finished five games behind the division-winning Pirates. They did manage a 7-5 record against the Reds, who won 102 games; the only other team who had a winning record vs. Cincinnati that year was the Padres, who went 10-8 against them.