Have you had enough of ripping apart the Fox/Miles to Oakland trade? Personally, I think Jim Hendry did a fine job of dumping (most) of Miles' contract (the Cubs are giving the A's $1 million) and getting at least one possible major league arm in return. Let's move on.

I have located another historic photo of game action at Wrigley Field, courtesy again of eBay member "nicepictures". There are actually enough clues in the photo to determine the date and players involved without me telling you a single thing about it. Before you go past the jump for the answer, see if you can figure it out. 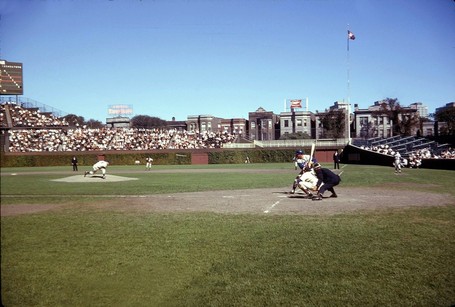 Well, you're thinking, what are the clues? You can't see the clock, or the names of the teams on the scoreboard. Your first clue is the team name on the batter -- it's clearly "Los Angeles". The batter is lefthanded and wears #4. As it turns out, #4 is one of the one of the Dodgers' retired numbers -- it belongs to Duke Snider.

OK, so now we've narrowed it down to 1958-62, the years Duke Snider played for the Los Angeles Dodgers. But even though there are no teams on the board, you can tell that the board has the red lines in the middle indicating the "Chicago" spot on the board that was created when the leagues expanded to 10 teams. Further, the AL side of the board says "NITE GAME" -- indicating the game was probably played on a weekday, since night games on weekends were rare in that era.

Later in 1962 #39 was issued to Paul Toth, after he was acquired on September 1. Now we're getting somewhere. The only game in which Toth faced Snider at Wrigley was Friday, September 14, a game in which Toth had to enter in relief in the first inning after starter Don Cardwell (and two other relievers) gave up seven runs while recording only one out. Toth faced Snider twice; once in the first after the Dodgers had already batted around, and again in the fourth. This photo is likely from the first inning; look at the angle of the shadows, which would have been different in the fourth inning, later in the afternoon in mid-September.

The result of this at-bat was a fly to left field -- Duke Snider made the first two outs in that inning. The Cubs lost the game 13-7; it was the ninth loss of a ten-game losing streak for that awful Cubs team which set the club record for losses with 103 (tied four years later).

But we have a photo of a moment frozen in time from that season, left for us to decipher 47 years later. Attendance that day was 5,356; looks like probably half of those people were in the bleachers. The catcher was Dick Bertell; second baseman was Ken Hubbs; first baseman (obscured) was Ernie Banks; right fielder was George Altman. The plate umpire was Ken Burkhart and the other umpires visible were Frank Walsh (1B) and Chris Pelekoudas (2B).