A Cubs Annual By Any Other Name...

Share All sharing options for: A Cubs Annual By Any Other Name...

The Cubs annual I edited last year has returned... only it's not called "Wrigley Season Ticket" this year. The publisher, Maple Street Press, has decided to "brand" it with their name. 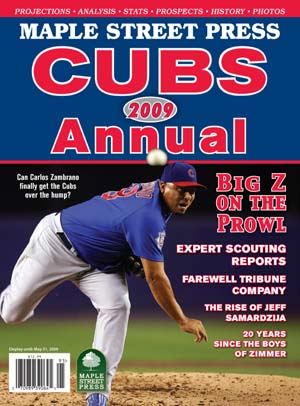 No matter the name on the cover, this year's version will have the same types of articles that last year's did, beginning with a team and NL Central preview. I think you will especially like what we've done with the Cubs team preview, because we have added detailed stat breakdowns for the starting eight (plus one, I added Reed Johnson, since he'll likely be platooning in CF), starting rotation and closer (I chose Carlos Marmol for this, though it could be Kevin Gregg, as you know).

In addition, there are profiles of Jeff Samardzija and how he may have an impact on this year's team; of up and coming minor leaguers Brandon Guyer and Jay Jackson; a minor league overview, reviews of the 1969 and 1989 teams, and a "what if" article about Wrigley Field's future; I enlisted a couple of this site's readers with design know-how to brainstorm some changes they'd make to the park. There's everything from a detailed statistical analysis of Kosuke Fukudome to some tips if you want to see the Cubs on the road.

Also, Bruce Miles has written an article about the "soap opera" that was the 2008 Cubs; Paul Sullivan has an insider's view of Tribune Co.'s ownership, now that it is over, and Len Kasper wrote an article describing what his job is like.

The rest of the annual was written by BCB readers -- Josh77, toonsterwu, cwyers, dfrancon, and No Southern Belle.

I hope you'll pick one up. Click on this link to order one right now from Maple Street Press' website and it will ship next week. It will also be available in bookstores (see the magazine section), and places like Target and Walgreens. All the writers, from BCB readers to the professionals, worked hard to put together the best and most detailed (and advertising-free!) season preview you can get anywhere for the Cubs. It will once again be $12.99 this year -- no price increase. Thanks in advance for getting your copy.