On The Cusp Of Spring Training

Share All sharing options for: On The Cusp Of Spring Training 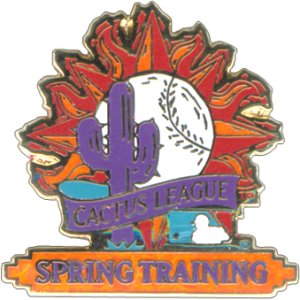 It seems not very long ago that we were all sitting, dreams crushed once again, watching the Cubs on yet another three-and-out in the NL playoffs.

Some of you said you were done, not coming back. But you knew you would.

And over the long winter we debated back and forth how each of us would change our team so that a fine regular season wouldn't turn into dust in only a few days in October. It seems odd, to me, that a 97-win team would have been changed so much, but the loss clearly galvanized Jim Hendry and Lou Piniella into action. Lou felt the club didn't have enough lefthanded hitters, so Hendry sent the productive but righthanded Mark DeRosa to Cleveland for three minor leaguers and lefthanded-hitting Mike Fontenot will play most of the time at second base. A number of us -- myself included -- think that the loss of DeRosa may be the one thing that Hendry will regret, given his versatility, production and good clubhouse presence.

Eight other players who were on the postseason roster: Bob Howry, Daryle Ward, Jim Edmonds, Henry Blanco, Ronny Cedeno, Felix Pie, Jason Marquis, and Kerry Wood, won't return in the blue pinstripes in 2009. That seems a large number of changes for a team that won back-to-back division titles, but Lou seems determined to put his personal stamp on this club, and win or go home with the guys he wants, rather than a large number of people he inherited. I will miss Wood, not for sentimental reasons, but because I think the Cubs' bullpen would have been better with Carlos Marmol setting Wood up, than with Kevin Gregg setting up Marmol (or vice versa).

The Cubs' other major change in 2009 will be in right field. Kosuke Fukudome, signed to great fanfare a year ago, flopped in the second half and so will now platoon in center field with Reed Johnson. I was on the sign-Adam-Dunn bandwagon, bad as he might have been in right field, that bat would have looked awfully good in the Cubs' lineup. Now, Dunn will bash homers at Nationals Park in Washington -- playing only seven games against the Cubs, who he owns, instead of 16 or 17, and the controversial "Gameboard", Milton Bradley, will play right field.

Bradley is a superlative hitter when he's healthy. Supposedly fully healed from the late-2007 knee injury, he needs to play 140 or so games to be worth the two-years-and-an-easily-makeable-option contract Hendry signed him to. I'll be ecstatic if he does so, because it will mean another year of likely having the Cubs lead the National League in runs scored, as they did even with a black hole in right field and a shortstop who couldn't smack an extra-base hit if you put it on a tee for him.

The starting rotation pitching staff returns intact, with Ryan Dempster the other big off-season (re)signing. The keys to the rotation are Carlos Zambrano and Rich Harden. Which Z do we get? The guy who threw the spectacular no-hitter in Milwaukee vs. the Astros? Or the guy who, in his next start, got battered by the Cardinals and stalked off the mound before Lou came to get the ball from him?

If it's the first one, we're in good shape.

Rich Harden has been fragile his entire career. He has made 30 or more starts in a year only once -- in 2004. Last year he made 25 starts, the most since, and if he'd been able to throw 14 more innings he probably would have led the major leagues in ERA and struck out more than any National Leaguer not named Lincecum. He'll have to be babied to get to 30 healthy starts in 2008. If he can do that, this rotation is formidable and doesn't even need the addition of a certain San Diego Padres righthander.

Most of the rest of the teams in the NL Central stood pat or, as in the case of the Brewers, who lost two key starting pitchers, regressed, so the Cubs should be favorites for a three-peat as NL Central champs. Many of the statistical prediction models show the Cubs winning as many as 95 games. That's surely possible, but youneverknow (Joaquin Andujar's favorite word) what might happen during the year with injuries, or a team coming out of nowhere (raise your hand if you picked Tampa Bay to be the 2008 AL champion a year ago -- no hands that I can see).

It's been a long, cold, snowy winter in Chicago and most of the Midwest, the worst winter in 25 years, not to mention having news reports each day seemingly trying to one-up themselves with each bizarre revelation about a present or former major leaguer. That makes the pictures we're going to see in the next couple of days -- ballplayers in uniform working out, warming up, throwing baseballs -- that much sweeter.