Share All sharing options for: Book Review: "Sweet Lou And The Cubs"

The grizzled, day-old-bearded face of Lou Piniella glowers at you from the cover of George Castle's new book, "Sweet Lou And The Cubs", so you'd be forgiven if you thought this breezy new trade paperback was about Lou's transformation of the cuddly Cubs into growling baby bears. 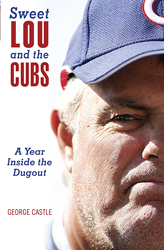 While an examination of who Lou was and is, and how he got here, is part of this book, it's really a review of the 2008 season -- I suspect George thought he'd be writing a book about what would be, at last, the Cubs' championship season after ... well, you know.

We don't have to rehash the reasons for the playoff implosion here, though Castle does so in his epilogue. Full disclosure: George asked me, not long after the season ended, for my thoughts on what happened and why. I directed him to this post from last October 10, from which he liberally quoted in the epilogue. I stand by what I said there, and I repeated it yesterday when I saw this FanPost.

And that's one thing that Lou Piniella has tried to do since he came here -- get the focus on winning on the field. We've all heard about the "Cubbie Swagger" that Lou has tried to instill in the players, and Castle deftly shows us how Lou got to this point in his career; there's an excellent summary of Lou's playing and managing career. I had forgotten that Lou actually served about half a year as Yankees general manager under George Steinbrenner (1987-88) before being fired (who wasn't by King George in those days?) and becoming a "consultant", before moving on to the Reds, where he won what is to date his only World Championship as a manager, in his first season there (and you'll also find out why he abruptly left Cincinnati).

Castle also goes into great detail about Piniella's entertaining postgame press conferences. You've heard them, and the malaprops Lou is famous for. But are those really malaprops, or is he being crafty and calculating? Read the book and you'll find out. You'll also find out why the famous Lou cap-throwing tirade on the day after the Zambrano-Barrett brawl will likely be his last such blowup.

But most of all, this is a bittersweet recap of last year, with several chapters devoted to individual players and what makes them tick. I particularly liked the Ryan Dempster chapter -- it really shows how dedicated Dempster has become to his craft, after being viewed as the "clubhouse clown" for some of his career. If the Cubs had won it all, the book would have been a loving celebration from a writer who's been a lifelong fan.

Instead, it serves to remind us how great everything was... until October 1. An entertaining read, well worth your preseason time.