Share All sharing options for: The Real Story About Wrigley Field's Condition

I have learned key information about Wrigley Field from an extremely reliable source, who has spoken to someone involved in the current off-season work going on at the ballpark. You've probably seen some of it, both on the webcams and if you've gone by the outside of the park. In addition to work on the upper deck, there has been some work on seating in the bleachers, and just today, going by the park, I noticed they had painted the outside railing around the edge of the bleachers (and that's only three years old). 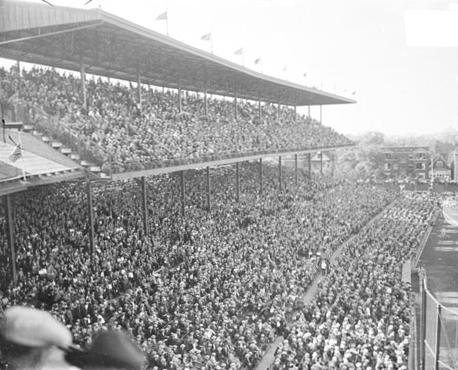 Wrigley Field's upper deck as it appeared in 1927

Among the work currently being performed is concrete replacement on some of the ramps. That brings up the issue of the condition of the upper deck (where, as you know, some concrete fell from underneath onto some terrace seats in 2004). The upper deck was originally constructed in the 1920's, but the concrete that fell was not original; it had been replaced in tandem with the realignment work done on the lower deck in the late 1960's (the entire lower grandstand was rebuilt, and the seats in the corners turned to face the plate -- as a result, seating capacity was reduced by several thousand at the time).

My source says that the recent spalling (concrete cracking and falling) problems had to do with concrete compromised during subsequent remodeling (drilling for anchors during the new backstop installation, etc). He says that the upper deck concrete is perfectly sound where no disturbances are present.

This makes sense to me. The upper deck concrete has had a fair amount of "compromise" since the 1970's, including that new backstop, the skyboxes, new signage, new press box, etc.

So -- if the Cubs want to redesign and redo the upper deck, and I suspect they will, it won't be due to any major structural problems. It'll be to improve the ballpark experience for everyone. I imagine new ownership will have quite a bit to say about this once they officially take over.