Book Preview: "Cubs By The Numbers"

Share All sharing options for: Book Preview: "Cubs By The Numbers"

Many of you are familiar with Kasey Ignarski's comprehensive webpage that has a list of every Cub to wear a uniform number and what number they wore, since the Cubs first put numbers on their backs in 1932. (It wasn't until that year that all teams finally numbered their players.) Kasey often posts here under the username "kaseyi". 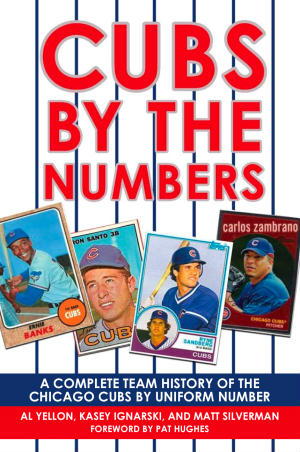 Kasey's been a friend of mine for many years and it was of this list that an idea was born last spring. Last April, I read this review of a new book called "Mets By The Numbers", and, knowing of Kasey's exhaustive research into Cubs uniform numbers, thought, "We could do this for the Cubs!" I contacted Kasey and discovered he knew one of the MBTN authors, and in the matter of a few emails with Matt Silverman, the other MBTN author, we had a contract with Skyhorse Publishing for "Cubs By The Numbers". (Yes, we let a Mets fan write this with us -- after all, he was the point man for getting us the deal. Matt's a good guy and the collaboration couldn't have been smoother.)

Here is Skyhorse's description of what we've written:

What do Dizzy Dean, Catfish Metkovich, John Boccabella, Bill Buckner, Mark Prior, and Kevin Hart all have in common? They all wore number 22 for the Chicago Cubs, even though seven decades have passed between the last time Dizzy Dean buttoned up a Cubs uniform with that number and the first time reliever Kevin Hart performed the same routine.

Since the Chicago Cubs first adopted uniform numbers in 1932, the team has handed out only 71 numbers to more than 1,100 players. That’s a lot of overlap. It also makes for a lot of good stories. Cubs by the Numbers tells those stories for every Cub since ’32, from 1930s outfielder Ethan Allen to current ace Carlos Zambrano. This book lists the players alphabetically and by number, but the biographies help trace the history of baseball’s most beloved team in a new way.

For Cubs fans, anyone who ever wore the uniform is like family. Cubs by the Numbers reintroduces readers to some of their long-lost ancestors, even ones they think they already know.

The book is, as the blurb says, really about the stories, more than just lists of numbers. Each chapter in the book lists the Cubs who wore that uniform number, from the #1 worn by the popular Augie Ojeda, to the #99 that the less-than-fan-friendly Todd Hundley wore in 2001. More than just lists of numbers (although you'll never quite look at any Cub wearing #7 in the same way again), the book's full of stories about hundreds of players, from Hall of Famers (you'll find out what number Ryne Sandberg originally asked for before he got #23), to guys you'd perhaps only heard of when I posted their photo here and asked you to "Name that Cub". And, you'll find out the identity of the one obscure Cub whose uniform number we were unable to locate, despite efforts to do so for many years.

We had fun researching and writing this book and I learned a lot about players long forgotten... but now remembered in its pages. And so Kasey, Matt and I think you'll enjoy reading this different take on the history of our favorite team. WGN Radio play-by-play man Pat Hughes graciously wrote the foreword for us.

You can preorder "Cubs By The Numbers" by clicking here. It will ship in early March. Enjoy, and thanks from Kasey, Matt and me.