The song "This Time It's For Real" came out in the summer of '77 and those of us who watched the Cubs roar out to an unbelievable start could have been forgiven if we had adopted that as the team's theme song that year. 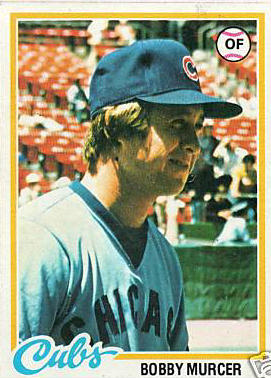 Consider the context: we hadn't quite gotten over the crushing disappointment of 1969 and the subsequent failures of our childhood heroes, including 1973 when, as in 1969, they raced out to an 8.5 game lead in June, only to collapse -- at one point in July and August going 5-27 -- and finish fifth. GM John Holland backed up the truck after 1973 and the '74 through '76 editions of the Cubs were pretenders, not contenders.

A former member of the late and unlamented College of Coaches, Bob Kennedy, had been hired as GM on November 24, 1976, and he immediately got busy remaking the franchise. He sent the popular Rick Monday to the Dodgers for the sore-kneed and sore-ankled Bill Buckner and a kid SS named Ivan DeJesus, shipped the underperforming Bill Bonham to the Reds for Woodie Fryman (OK, that one didn't work out so well), and in a controversial move, traded popular and productive third baseman Bill Madlock to the Giants for Bobby Murcer and Steve Ontiveros. (Ontiveros was an acceptable 3B, but his hitting was atrocious -- despite hitting .299 with 32 doubles and 81 walks in 1977, he scored only 54 runs.)

On the surface, the deal made no sense -- why would you ship a 25-year-old 3B who had won two batting titles for a 31-year-old outfielder? The purported reason was Madlock's salary demands. Then the Cubs gave Murcer more money than Madlock had supposedly been asking for. Without making any accusations, it was widely assumed at the time that Madlock wasn't the type of black player the Wrigleys liked... even though it was the 1970's, black players like Oscar Gamble, Bill North and Madlock had been shipped away for virtually nothing, even though they went on to have productive years elsewhere. It was the wrong thing to do from the standpoint of equal rights, and the wrong thing to do from a baseball standpoint, too.

And probably the key change in the 1977 team was new manager Herman Franks' decision to use reliever Bruce Sutter, in his first full major league season, only in games where the Cubs were leading in the late innings. He wasn't a closer in the modern sense, since he often threw more than one inning, but Franks was the first manager to use someone in this sort of role. And Sutter dazzled, until August, when the workload caught up with him and he missed three weeks.

The team got off to a mediocre start, standing 7-9 on April 30. And then they started winning, and winning, and winning some more. On May 17 they set a team record with seven homers and beat the Padres 23-6 at Wrigley Field. Eleven days later they beat the Pirates 6-3 to go into first place and, as they did on July 2, 1967 when the Cubs took over the top spot in the NL for the first time that late in the year since 1945, fans refused to leave until the Cubs flag on the scoreboard was moved to the top spot in the NL East.

They lost a pair at St. Louis to end May 28-16; that still made it a 21-7 month, one of the best in team history. June started off just as well as May -- there was a winning streak of six and another of eight, and the last of the eight-gamer was a 4-2, 10-inning win over the Expos in Montreal. The Cubs' record was 47-22 and their division lead was 8.5 games.

In those days not every road game was televised. That happened to be one that wasn't; those of us listening on WGN radio heard an exuberant Lou Boudreau say, "They can kiss the .500 mark goodbye!"

Oh, poor Lou. If he had only known what was to come.

It seemed at the time to be the kind of game that you'd remember forever when your team went on to postseason glory. Instead, it was the beginning of the end. The Cubs fell out of first place when they lost the first game of a DH to a bad Padres team on August 7, and a week later got swept in a four-game series by the eventual division champion Phillies, falling 6.5 games out in third place. On August 22, Bobby Murcer's 24th homer of the year helped seal a 3-2 win over the Giants, putting the Cubs briefly back in second place, 7.5 games behind. On that date, Murcer had 24 HR, 83 RBI and was hitting .280/.374/.492, seemingly on his way to his first 100-RBI season.

The home season ended on September 28 with a 5-2 loss to the Phillies in front of 5,116. The Phils had clinched the division at Wrigley the day before. And as for Lou Boudreau's proud boast on June 28? After winning the first game of that Philly series 11-7 on September 26 with a 20-hit barrage, including a too-little-too-late homer from Murcer, the Cubs stood 81-76.

They lost their last five games to finish exactly at .500.

There were good things that happened in 1977. Rick Reuschel won 20 games -- the only Cub pitcher to win 20 between Fergie Jenkins in 1971 and Greg Maddux in 1992. Bruce Sutter saved 31 games, tying what was then the team record, and had an amazing WHIP of 0.857. Two years later he saved 37 games, which stood as the club record until Randy Myers saved 53 in 1993.

But it wasn't enough, and it wasn't "for real". The Cubs edged around the margins of contention with much the same cast of characters in 1978 and 1979 before collapsing to a 98-loss year in 1980, and it would have been worse in 1981 if not for the strike. When Dallas Green came in the next year, he began the renaissance that led to the 1984 division title.