Ever heard of Frank Shellenback? 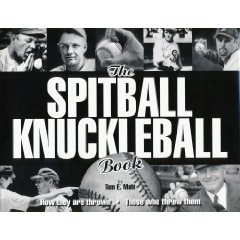 Shellenback was a kid pitcher with the White Sox in 1918 and 1919. He didn't appear in the 1919 World Series and wasn't one of those tainted in the Black Sox scandal. But in 1920, when the spitball was outlawed except for 23 pitchers who were grandfathered in until their careers ended, Shellenback, who depended on the slippery pitch, was "exiled" to the Pacific Coast League. By the time he was done he had won 295 games there, which still stands as not only the PCL record, but the record for any minor league.

That's not why he's important, though. After his playing career he became a longtime coach under Leo Durocher and other managers of the Giants -- where he taught pitchers Bob Shaw and, more importantly, Gaylord Perry, how to throw spitballs (or, since by that time, as the book says, loading up pitches with "spit" was passe, with other substances).

The book details the full history of the spitball, with profiles of the final 23 legal spitballers. The last of them, Burleigh Grimes, pitched for the Cubs in 1932 and 1933 (and badly in the '32 World Series, posting a 23.63 ERA). There's also a section on some pitchers who threw it illegally in the era of legal spitballers -- Vic Aldridge supposedly did so for the Cubs in 1922, 1923 and 1924 -- and explains why the pitch virtually disappeared until Shellenback started teaching it again in the 1940's.

The other section of the book deals with knuckleballers (and its cousin, the knuckle-curve, repopularized in the 1970's by Burt Hooton, who the Cubs shipped away in one of the worst deals John Holland made in the '70s), and explains how, just as happened with the spitball, how the pitch has become rare because there simply aren't pitchers around to teach it any more. The only true knuckleballer still active is Tim Wakefield, who, like other recent knuckleballers Phil Niekro and Charlie Hough, has been able to remain effective well into his 40's.

The book says that Jared Fernandez and Steve Sparks are "active" knuckleballers, but neither of those men has pitched in at least three years. It does not mention Charlie Haeger, who, at 25, might be the majors' last hope to have an effective knuckleballer once Wakefield retires.

One of the best things about this book is the large number of photos and drawings showing knuckleball grips -- you'll be surprised at how many different ones there are, and most of them don't use knuckles at all, but grips with fingernails.

I had a few nitpicks about the editing in this book -- former Cubs owner Charlie Weeghman is called "Weegham", Hooton's name is misspelled "Bert", and right across from the title of the section on Pedro Ramos, a photo caption calls him "PADRO", but otherwise, this book is an interesting read about an era that may be about to pass from the baseball scene.