Share All sharing options for: One Step Closer To Opening Day: Cubs 2, Japan 3 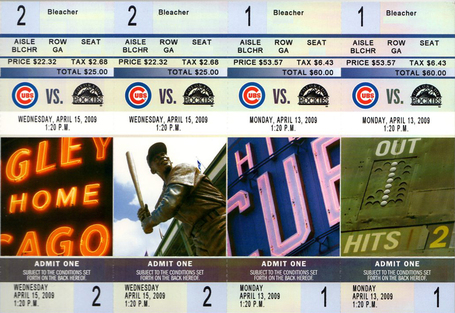 Season tickets (click on the image above to open a larger version in a new browser window) arrived today, and that's just one more sign that spring and Opening Day are getting closer -- the home opener is one month from tomorrow. They sent out the tickets in a different format this year, as you can probably tell from the image -- in previous years, you got one book for each ticket in your account. This year, you get one book with all the tickets -- according to the note from the Cubs, this is supposed to make it "easier" than tearing out, say, one ticket from four books if you had four tickets. I'm not sure I see how this is any sort of great advantage, and since for most of us who are bleacher season ticket holders, we share a season ticket with someone who doesn't necessarily come with us to the game, but instead meets us there, this is going to require me to tear every single ticket out of the book so I can deliver them to that person.

In addition to the four pictures on the tickets shown, the two other images (the tickets come in pages of six) are of the Billy Williams and Ryne Sandberg flags, and the 400-foot sign in CF.

Oh, well. The Cubs played Japan's WBC team today and lost 3-2, despite starting what was mostly a regular lineup, except for Paul Bako (I consider Reed Johnson a semi-regular, while Bako is a backup). And Bako's passed ball allowed Japan to score their second run of the game. Carlos Zambrano, otherwise, threw pretty well, allowing three hits, one earned run, and only one walk in his four innings, striking out two, and also striking out in both of his plate appearances. There was no indication on Gameday whether he broke any bats over his leg or not. Meanwhile, Bako, at least, walked twice and singled in the first Cubs run.

The Cubs bullpen, today consisting of Angel Guzman, David Patton, Randy Wells, Kevin Gregg and Neal Cotts, was outstanding, allowing Japan only three hits over the last five innings. Patton's two walks helped lead to Japan's third and final run of the day. This is a good sign, and I was especially pleased to see Guzman settle down. Patton is likely going to be returned to the Rockies. He might be worth keeping around, but the Cubs already have a pretty full bullpen at Iowa, and unless they can unload someone else (Say, think the Rockies would take Luis Vizcaino back?), I think this Rule 5 pick is going to wind up being meaningless.

Micah Hoffpauir had yet another Erin Andrews-induced extra-base hit (today, a double). I realize this is something we just kind of started here for fun, but it's weird how nearly every time an EA photo is posted in the game thread, he hits. If only he could play third base. Two ninth-inning doubles (by Jake Fox and So Taguchi) closed the lead to 3-2 and brought Micah to the plate, but EA's powers only go so far. Mighty Micah struck out.

Kosuke Fukudome was 1-for-4, a sixth-inning RBI single after a pair of walks. He didn't walk at all -- not a good sign, but neither did he strike out, and that is a good sign. One game doesn't make for much analysis (last night vs. the Giants he was also 1-for-4, with a walk and a K, and now he's off with the Japanese team to San Diego for round two of the WBC.

Today's attendance of 6,591 -- less than I'd have expected brought the spring total so far to 83,340, an average of 9,260, which should go up this weekend with the Angels at Mesa on Saturday. Tomorrow is the final split-squad day of the spring season -- Sean Marshall will pitch in Mesa against the Mariners, and Chad Gaudin faces the Angels at Tempe. Both games will be available via MLB Audio, with the announcers from the Mariners and Angels flagship stations. How do we decide which game to listen to? Or follow one on audio and the other on Gameday?

Decisions, decisions. And you thought Lou had it tough. Until tomorrow.