Share All sharing options for: The Marshall Plan: Cubs 8, Mariners 1 and Cubs 2, Angels 8 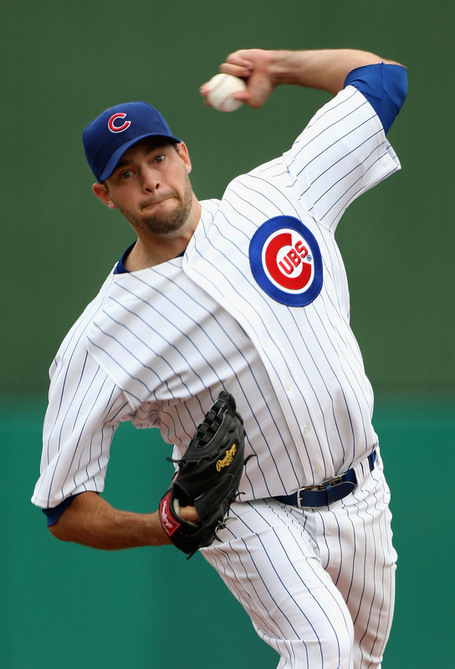 While I was trying to keep track of both of these games this afternoon, I was going through my email inbox, and either filed or deleted over 1000 emails that were cluttering it up.

Anyway, the Cubs won and lost today, defeating the Mariners at Mesa 8-1, and losing to the Angels 8-2 at Tempe. Neither the Yahoo standings nor the standings at mlb.com seem to have counted yesterday's loss to Japan's WBC team in the overall numbers, so that makes the spring record 8-9, after the final split squad game of the spring (pretty early in the spring for that to happen, but given the longer spring schedule this year, maybe teams felt they didn't need as many of them).

The home team looked great and the visitors looked bad. As well as Sean Marshall threw at Mesa, that's as bad as Chad Gaudin looked in Tempe. In 1.2 innings, Gaudin allowed five hits and four walks, and Kendry Morales hit a grand slam in the six-run second inning, making it 6-0. One more hit later, Gaudin was finally pulled.

Gaudin has no options left and is slated to make $2 million this year. Next Wednesday, March 18, is the deadline for releasing players and owe them only 30 days' pay (I believe this comes to 1/6 of the annual salary). It would not surprise me if the Cubs did this -- if the numbers are right, the Cubs would owe Gaudin $333,333.33, less than the minimum annual salary. At this point, he really doesn't seem to have anything -- maybe that bizarre dumpster injury he suffered last year is still bothering him. Plus, this would assure Luis Vizcaino, whose contract might make him untradeable, and who threw a little better today, of a spot in the bullpen. Gaudin's deal might make him dealable, but pitching as poorly as he has (10.38 spring ERA, and while spring stats don't necessarily mean anything, that's pretty bad), who would want him?

That's the message from the Tempe game. In Mesa, Sean Marshall was again dominant, throwing into the fifth inning and probably being pulled because of a pitch count; he allowed three hits (all singles), one walk and an unearned run that was helped by Sean's own throwing error. His 0.38 ERA so far this spring may have nailed down the fifth starter's spot for him.

Danger, Will Robinson! Marshall also threw extremely well in 2006 spring training -- I wrote this post at the time on one of his good outings and of course, he made the Opening Day roster that year even though he had barely pitched above A ball. So spring performances can fool you, but in this case, Marshall now has three more years of experience and at age 26, appears to be ready to take his place as a solid major league starter. Here's a guy who wasn't highly touted -- a sixth-round pick in 2003 -- and instead of rocketing through the organization, he made slow, steady progress. I've always liked him and he seems to have not only the physical talent, but the right makeup. Good for the Cub organization for developing another major league starting pitcher.

Sam Fuld, who will likely spend the year at Iowa again, homered for the Cubs, as did Andy White (Andres Blanco). Just-acquired Esteban German got to Mesa in time to make an appearance in the game, probably making most of the people in attendance say, "Who?" In Tempe, no one did much except Bobby Scales, who drove in the only Cub runs with a double. He also made two errors at 3B that helped lead to the last two Angels runs; still, I like Scales and hope that he'll eventually get a September callup, if only just to reward him for the eleven (including this year) seasons he's put in, in the minors.

Attendance at Mesa today was 10,910, bringing the total to 94,245 for ten dates (9,425 average, which should go up tomorrow, as tomorrow's game vs. the Angels is indicated as a sellout. And at last, we get Pat & Ron and Len & Bob back tomorrow -- the game will be on both WGN radio and TV. Having listened to other teams' announcers all week, I think you'll agree -- we've got it pretty good here on both radio and television.