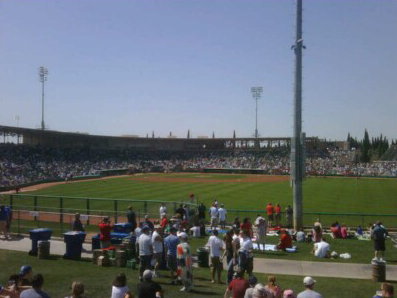 It was beautiful in Mesa today (thanks to BCB reader and friend bison for the photo), and beautiful in Chicago (a nice, near 50-degree day, probably far nicer than it will be on Opening Day). Unfortunately, the play of the Cubs wasn't as beautiful, and they lost to the Angels 6-4, dropping the spring record to 8-10, in front of a sellout of 12,861 at HoHoKam Park. That raised the 11-game spring attendance average to 9,737.

There were some clues in Lou's lineup choices and use of pitchers today to what will happen for the 25-man roster and perhaps even the Opening Day lineup. Aaron Heilman, ostensibly still in competition for the fifth starter spot, threw only two innings. He didn't throw too badly -- although he gave up three extra-base hits -- but if he were still in the running for a starting slot, wouldn't you think Lou would have wanted him stretched out more than two innings?

The fact that Chad Gaudin threw poorly yesterday, that Heilman threw only two innings, and that Lou said yesterday that Jeff Samardzija might stick in the bullpen even if he doesn't make the rotation, says to me that Sean Marshall has pretty much been anointed the fifth starter, barring injury or some other bizarre happening in the rest of camp.

Marshall may wind up in the pen as well for the first three weeks, as there are three off days, or -- and wouldn't this make more sense? -- let him stay at extended spring training for a while and pitch there, rather than sit in the pen and rot as the 12th man. Lou has also said that he wouldn't mind another lefty in the pen, so maybe Marshall could fill that role until the fifth slot is needed. Or, Lou could rotate Rich Harden and Marshall in the 4/5 slot until the schedule dictates a fifth starter is needed.

Carlos Marmol's return to camp wasn't exactly what we had hoped -- he was a little wild, hitting two batters, although he got out of his inning unscathed with a couple of K's. Now, tell me what's better in preparing a closer for the season: pitching in an extra inning for your country, or throwing the third inning in a 1-0 game just so you can face major league hitters? We'll know more about whether Marmol can handle closing situations when there are actual closing situations, which may not occur for him till the last week of camp.

The other thing that we now know -- or know, "if the season started today, is that Mike Fontenot has won the 2B job, no surprise given the fact that Lou liked him a lot last year and his good hitting this spring. He'd bat sixth, which would give the Cubs LH hitters batting 2nd (Kosuke Fukudome), 4th (Milton Bradley, a switch-hitter), and sixth, and also probably eighth when the backup catcher starts, whether it be Koyie Hill or Paul Bako. Bradley, incidentally, had a RBI double today and played right field; he'll need to get a lot more time out there to get used to playing the field every day again this year.

Bad things today: I cringed when Derrek Lee hit into a first-inning double play. We all hope that is not a sign of things to come. Angel Guzman also looked bad; I'm rooting for him to succeed, but maybe he's reached the end of the line with the Cubs.

Another bad thing today: being out and about for a while, I heard the middle innings of this game on the radio. WGN's Blackhawks studio host Judd Sirott, nephew of longtime Chicago broadcast personality Bob Sirott, did the middle innings as an audition, presumably, to replace Cory Provus. Maybe he was nervous, but I didn't care for him. His delivery is high-pitched and nasal, too high for baseball, although he did hockey games (the Wolves) for many years. He also said it was at the end of 5 1/2 innings, when it was really the middle of the fifth. I think the Cubs have to go back to the pile of audition tapes for this slot.

Tomorrow, the Cubs make their first Tucson expedition of the spring to take on the Diamondbacks; Rich Harden makes his second spring start against Brandon Webb. You can listen to the game via the D'backs flagship, KTAR, or on XM 176.