Share All sharing options for: A Modest Trade Proposal; and Cubs 10, Diamondbacks 7 Recap

I wound up being fairly busy this afternoon; have had an issue with Comcast (don't ask) which was finally solved, so I didn't hear much of the Cubs' closer-than-it-needed-to-be 10-7 win over the Diamondbacks, which was accomplished with most of the big guns enjoying a Sunday off in the Phoenix area while only our Cajuns among the regulars took the trip to Tucson.

One of them, Mike Fontenot, hit his third homer of the spring -- I really like Fontenot and I know most of you do too and I think he could be positioned for a real breakout season. Micah Hoffpauir also homered, a three-run shot, giving him 13 RBI for the spring, which as of this writing ties him for the major league spring lead with one guy who's a legitimate RBI man (Ryan Howard) and one who isn't (St. Louis' Joe Mather). The Cubs' four-run eighth inning, which sealed the victory, featured three homers, Fontenot's and two others by guys (Brad Snyder and Welington Castillo) who won't make the major league roster, off a guy who won't make Arizona's (Kyler Newby). 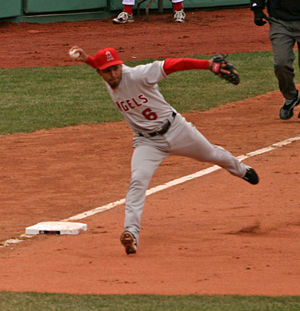 Both starting pitchers, Rich Harden and Brandon Webb, got cuffed around pretty good; Harden had to get pulled by Lou after he walked in a run. Let's just say it wasn't Rich's finest hour, and hope he does better next time.

The Arizona announcers, Greg Schulte and Tom Candiotti, were pretty kind to the Cubs (and decent overall), although one of them did say "Mitch" Hoffpauir before correcting himself, and called the Cubs' 9th-inning pitcher "Ascancio" instead of "Ascanio". No matter how you pronounce the name, Jose did not have a good day and had to be bailed out by David Patton. The D'backs radio guys seemed convinced that the Cubs are going to "run away" with the Central, with the Cardinals having "too many question marks" and feeling that if there's a surprise team, it might be the Reds (my view: not as long as Dusty is managing them). Which brings me to my trade proposal, something that would help both teams involved and be doable from a contract point of view.

Several people here have suggested that Maicer Izturis of the Angels would be a good pickup. After looking at what he's done and what positions he can play, the fact that he's a switch-hitter, and his contract status, I agree.

Here's the guy we can dangle in front of Tony Reagins: Chad Gaudin. Yes, we've all dissed Gaudin for his poor performances in spring training so far and the Angels themselves knocked him around pretty good on Friday. But the Angels have some question marks in their starting rotation now, with Ervin Santana expected to start the year on the DL and Kelvim Escobar's return date still uncertain. Gaudin, who made 34 starts for the A's, in the same division as the Angels, in 2007, would give them an extra arm to put in the mix.

Meanwhile, Maicer Izturis seems to be on the back burner for the LAA's. He's gotten far fewer spring AB's than Erick Aybar, who may be the frontrunner for their starting SS position, or the Angels might even finally turn to Brandon Wood, who was their golden-boy prospect a few years ago and who is having a good spring. If Wood starts, Aybar could back him up and Izturis would be expendable.

In this era, where it's occasionally difficult to make deals because of contract mismatches, this one's almost perfect. Gaudin is scheduled to make $2 million this year and Izturis' deal is for $1.6 million. Izturis could back up 2B, SS and 3B competently and his bat is acceptable for a backup role. He's got a little bit of speed and draws a few walks (well, at least more than his brother did as a Cub).

It makes sense, Jim Hendry. Here's one you could do that could help both teams, and we could forget about the Esteban German (now wearing uniform #53) experiment.