Share All sharing options for: Know Your Enemy: Milwaukee Brewers

This week, I'll examine the Cubs' five division rivals, in what I expect to be the order of finish behind the Cubs (yes, like most of you, I am predicting the Cubs will three-peat as NL Central champions). This is also a good time to examine the Brewers, since the Cubs will play them this afternoon at the Crew's home park in Maryvale, west Phoenix.

The Brewers' starting eight, which helped them to a playoff berth last year and 90 wins -- Milwaukee's best win total in 16 years -- returns intact. The Brew Crew's problem is that their starting rotation doesn't, and even though we as Cubs fans have the perception that the Brewers have a powerful offense, all those hitters ranked only third in the NL in home runs and seventh in runs scored. 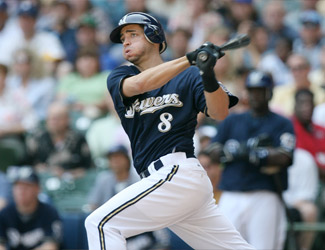 We know the hitters well; regardless of what you think of Prince Fielder's physique, the man can hit. However, his .879 OPS didn't even crack the top 10 in the NL, and neither did Ryan Braun's .888 (Aramis Ramirez and Adam Dunn tied for 10th at .898). If the Brewers are going to be contenders instead of pretenders this season, one of those two -- and my guess is that it'll be Braun, who is more accustomed now to left field and ready to enter his prime years at age 25 -- will have to step up and rank in the top 5. Eventually, the Brewers might have to think about moving Fielder (just the mental picture of trying to "move" a man that large is interesting) for some pitching help. The Brewers have some outstanding hitting prospects including Alcides Escobar, Mat Gamel and Lenny Dykstra's son Cutter, so they can probably afford to do this and very well might, maybe even during the 2009 season.

The rest of Milwaukee's offense is solid, though Rickie Weeks has never quite fulfilled the potential that made him the second overall pick in the 2003 draft. He's got good range in the field but has an occasional tendency to make errors at the worst possible time (as he did last July 28 when his throwing error on a potential DP relay allowed the Cubs to tie the first game in that key series, which the Cubs eventually won on their way to a sweep). The Brewers might want to keep an eye on Jason Kendall, who will be 35 in June, has caught almost 1800 games, and had a pretty bad offensive season. Their backup, Mike Rivera, is a decent player and probably deserves more than the 13 starts they gave him a year ago.

That's likely to happen with Ken Macha managing -- one of the worst things from a Cubs point of view to happen to the Brewers was the firing of Ned Yost, whose bizarre decisions may have cost the Crew some victories last year (example: at one point the Brewers were carrying 14 pitchers on their 25-man roster, and without one of them being Brooks Kieschnick, that severely limited their flexibility, as in this bizarre game against the Cardinals where a reliever (David Riske) had to bat and another pitcher (Jeff Suppan) had to pinch-hit because Yost didn't have anyone else available. (The Brewers won anyway, because the Cardinals were just about as short of players.) 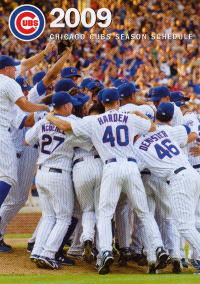 It's that pitching staff that may be Milwaukee's undoing this year. We all know what CC Sabathia did for the Brewers after his acquisition and what Ben Sheets did before his arm, apparently, completely disintegrated (he may wind up missing most or all of this year and has yet to sign, though it appears if he does, it will be with the Rangers). That leaves Yovani Gallardo as the Brewers' #1 starter. No question, Gallardo has talent, and the freakish knee injury he suffered last May 1 at Wrigley Field appears to be healed and shouldn't affect his pitching. The problem is, after Gallardo the Brewers have Jeff Suppan. Or, to be more accurate, four Jeff Suppans, because that's essentially what Braden Looper, Dave Bush, Seth McClung and Manny Parra are. None of those pitchers posted an ERA under 4.00 last year, and that's a big comedown from Sabathia and Sheets. Plus, Milwaukee's bullpen strikes fear into no one (except maybe Brewers fans). Trevor Hoffman, the all-time save leader, will close. Hoffman is 41 years old; he did have a fairly effective year last year for the Padres, but who knows when an older pitcher will break down? The rest of the pen (Riske, Carlos Villanueva, Todd Coffey, Jorge Julio, among others) is run-of-the-mill; I could have put almost any four names in there and you'd have about the same bullpen.

Brewers who are having good springs include the ridiculously pesty Craig Counsell; he has a .255 lifetime BA and .254 lifetime BA vs. the Cubs, but it seems like he always gets some sort of key hit against the Cubs despite that silly-looking batting stance. Counsell will be 39 in August and can still back up infield positions capably. Ex-Cub Casey McGehee is hitting .400 with three homers and seven RBI. To which I say: so what? McGehee hit .500 (13-for-26) in 2008 spring training, and .333 in 2007 spring training, and all it got him was 24 September AB with the Cubs (.167, 4-for-24) and his picture on the Cubs' pocket schedule this year (see photo). I suppose McGehee, who can also catch (sort of), might make the Brewers as their 25th man. He is the poor man's Scott McClain. Ex-Pirate Chris Duffy is also having a good spring, hitting .325 (13-for-40, a team-leading 8 RBI) and may make the team as a spare outfielder.

The Brewers are still a good team, but I don't see them winning 90 games again. Mid-80's is a more likely target, and a postseason berth seems out of reach. Ken Macha, though, won two division titles with Oakland A's teams that weren't expected to do as well as they did, and won 88 or more games all four years he was there. He'll get more out of the Brewers in the first month of the season than Ned Yost did in six full years.