Every year, it seems the experts dismiss the Cardinals, for one reason or another -- not enough pitching, not enough depth, whatever. And every year, somehow, the Cardinals contend. They have had only one losing season since 1999.

Some here have made fun of him for various reasons, but the fact is, a lot of the credit has to go to Tony LaRussa. Only the great John McGraw and Connie Mack have more wins as a manager than TLR; he'll celebrate the 30th anniversary of his first managing job this summer, and that's more years than anyone but Mack and McGraw, too. 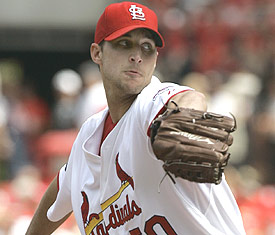 He must be doing something right, leading his teams to 12 postseason appearances, five pennants and two World Championships.

Before I get on to analyzing the team, a few words about the long and intense Cubs/Cardinals rivalry. Many here have made fun of them, and we get the same on Viva El Birdos, the SBN Cardinals site. But for me, I enjoy Cubs/Cardinals games. I've got nothing bad to say about the Cardinals fans I have met. They love their team and are passionate about the team and about baseball, and knowledgeable. All I want is for the Cubs to beat them every time we play them, but this isn't like the Yankees/Red Sox rivalry, where the fans really seem to actually hate each other. This rivalry is built on mutual respect, and over the last 25 years, both teams have had their times of dominance.

OK, enough of the lovefest. The Cardinals have their flaws again this spring, as they appeared to last spring, but they'll probably have enough to at least eke out a winning season, mostly on the strength of their power hitters, Albert Pujols, Troy Glaus, Rick Ankiel and Ryan Ludwick, who combined for 126 homers last year (comparison point: the Cubs' top four home run hitters hit 100 dingers in 2008). Glaus, of course, had shoulder surgery in January and there's no specific timetable for his return. These aren't your father's Cardinals, either: back in the era when the stolen base was king, the 1982 World Champion Cardinals hit only 67 homers, last in the majors, and had only two players in double figures (George Hendrick, 19, and Darrell Porter, 12).

While the Cardinals' outfield and catching slots are solid, the infield is only half so: Pujols and new SS acquisition Khalil Greene. The Cardinals are currently attempting to squeeze outfielder Skip Schumaker in at 2B. He's hitting well this spring, but fielding: not so much. Prospect Tyler Greene (now that would be a confusing DP combination) is also getting some time at 2B. For now, some combination of Brian Barden, Joe Mather, Brendan Ryan, and Tyler Greene will man 3B until Glaus comes back.

The key to the Cardinals' rotation is whether Chris Carpenter is healthy and ready to return. He has made three starts (eight innings) this spring without allowing a run, but the Cardinals are taking it slowly with him, too. Adam Wainwright will start on Opening Day; he threw well in 2008 after returning from an injury and they'll need him to be their ace all year. Last year, the Cardinals went far with the surprisingly good performances of Kyle Lohse and Todd Wellemeyer. They'll need more of that if they have hope to contend.

Right now, closer is an open position: it'll be either rookies Jason Motte or Chris Perez, or Ryan Franklin, or the dreaded "bullpen by committee", which I doubt LaRussa would use.