I freely admit this: I followed almost none of this afternoon's game, because when it's 75 degrees and sunny in Chicago in mid-March, it is far too nice to sit in the house when the game's not on radio or TV. 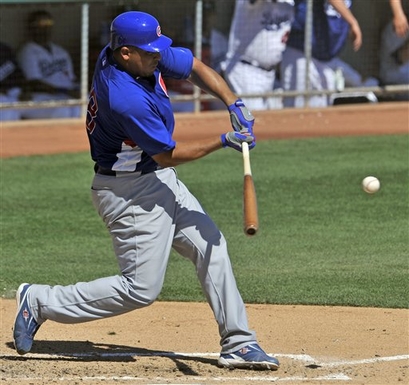 The Cubs beat the Dodgers 12-3, behind a 17-hit attack that was led by... Carlos Zambrano? Yes, that's right. Z had a three-run homer and an RBI double and since most pitchers don't get two at-bats in a spring training game, much less get two hits, I'm sure Z was much prouder of his batting performance than his five innings of pitching, in which he allowed three hits and all three Dodger runs.

Koyie Hill had four hits including a two-run homer and is now hitting .414 for the spring. Yes, I know. Spring stats. Meaningless. Still, if Lou is evaluating Hill vs. Paul Bako, what else does he have to go on? Neither one of them has hit much during the regular season, and Hill's outhitting Bako now. If Hill could hit 150 points lower than that in the regular season, he would be a useful backup catcher. Reed Johnson had three hits and Andres Blanco, who's still around camp (hmmm... maybe he still has a shot at the backup IF job) had two hits, two runs scored and two RBI.

The bullpen, today consisting of Sean Marshall, getting in some work, Neal Cotts, Randy Wells and Kevin Gregg, allowed two hits and no walks in four innings today, a nice performance. I still think Gregg seems better suited for exactly what he did today: come in to start an inning (preferably, the ninth), with no one out and no one on. Carlos Marmol can put out the 7th and 8th inning fires and set up. That's how I would do it, anyway.

Really, you could have gotten all of this from the box score, like I did. It was a good day for Z. It was a gorgeous day in Chicago. Hope you were out enjoying it, too, especially because it's a one-day early spring treat; back to reality and the 50's this weekend.

Tomorrow, Ryan Dempster will face the Giants' Tim Lincecum. Originally, Randy Johnson was to have thrown for San Francisco tomorrow, but he has a "tiny touch of bicep soreness", according to manager Bruce Bochy. The game will be available at the MLB.com Mediacenter via MLB.com announcers.