Share All sharing options for: Know Your Enemy: Cincinnati Reds

Every year, the so-called experts anoint a team as the sexy "surprise" pick to contend, or make the playoffs.

Now, ask yourself this, from a March 2009 standpoint: do you even remember who that "sexy" pick was a year ago? And second, how many of those experts were, a year ago, picking the Tampa Bay Rays to make the playoffs, much less the World Series?

The answers to those questions are: "no", and "none". 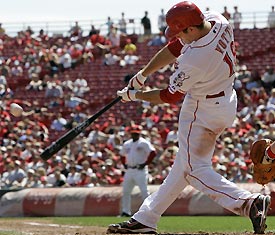 Look! I illustrated this preview without
a photo of Dusty Baker!

What this has to do with the Cincinnati Reds is: a lot of people are saying the Reds might be that surprise team this year, possibly even contending for a wild card. I'm here to tell you that I don't think this is going to happen.

One of the reasons for that is Dusty Baker. (There. It took me five paragraphs to mention Baker.) You know who Baker is? He's Leo Durocher. Let me explain. Durocher, at the time he was hired by the Cubs, had been a successful manager of two other teams, who had won three pennants and a World Series, had only three losing seasons out of 16, and perenially had his teams in contention. He should have won something with the Cubs; let's not go into that.

But Durocher had a season and a fraction as the manager of the Astros in 1972 and 1973, after the Cubs fired him, and although he had several very good hitters (Bob Watson and Jimmy Wynn in their primes, Cesar Cedeno before he got hurt), and a couple of very good pitchers (Jerry Reuss and a young J. R. Richard), he barely finished over .500 with them. One of the reasons, I think, is that he was 67 years old when he took over in Houston and was seriously out of touch with modern baseball.

Baker's career has followed a similar path. After ten successful years in San Francisco, with one pennant (and a shoulda-won World Series) and only three losing seasons, he was brought in to bring that winning tradition to Chicago. We don't need to rehash what happened. But part of the reason that he failed was that he continued to use strategies, etc. that didn't work even after it was proven over and over that they didn't work. Dusty will be 60 in June and I think he's out of touch.

The same fate that befell Durocher in Houston may be Dusty Baker's Cincinnati legacy. He has now had three consecutive losing seasons as a manager, and continued to do things in his first year with the Reds (batting Corey Patterson leadoff, overusing starting pitchers) that drove us nuts.

Thus, even with a team of talented hitters, I think Baker's fate is sealed with this Reds team. Despite finishing fourth in the NL in homers last year, the Reds were 12th in runs scored. Guess why? Because they were tied for 13th in on-base percentage. (No clogged bases in Cincinnati, and that's after ranking ninth in OBA in the NL in 2007.) That's not likely to improve this year, as their leading walk-drawer, Adam Dunn, is gone. And if Dusty starts Willy Taveras in CF and leads him off -- that .331 career OBA, eerily similar to the .330 OBA Juan Pierre posted for Dusty's 2006 Cubs -- is going to drag down the Reds' run-scoring abilities, even with fine hitters like Joey Votto, Jay Bruce, Brandon Phillips and Edwin Encarnacion in the middle of the lineup. So I don't expect the Reds to score many more, if any more, runs than they did a year ago. (Incidentally, if Votto could play against the Cubs every day, you could send him to the Hall of Fame. Nine of his 28 career HR are vs. the Cubs, and he's 5-for-13 off Ted Lilly with 2 HR and 8 RBI.)

So any success they'll have in Cincinnati rests on the shoulders of their pitching staff, which returns mostly intact from 2008. Edinson Volquez, the Reds half of a trade that helped both teams, finished tied for third in the NL in wins and tied for 2nd in K's, which got him fourth place in ROY voting, and surprisingly, no Cy Young votes at all. Aaron Harang will have to rebound from his awful 2008 (he's having an awful spring as a followup so far), and one of Johnny Cueto, Micah Owings or Homer Bailey will have to step up and become the pitcher that management expected them to be as they all rocketed through farm systems. Owings was that prospect for the Diamondbacks, before he was acquired in the Dunn deal -- and he didn't even pitch a game for the Reds last year, instead just pinch-hitting four times, getting two hits. He's having a good spring, with 16 K in 14 innings and a 1.23 ERA.

Like their rotation, the Reds bullpen in 2009 is pretty much the same as last year's. Francisco Cordero is a good closer, but also prone to spectacular meltdowns, as we saw when Cordero was a Brewer and again last year in Cincinnati (see this game and this game for good examples). Finally, it's difficult for any Cincinnati pitching staff to have a good year in their ballpark, which is a launching pad. The 800 runs allowed ranked 13th in the NL, and Reds pitchers have allowed 800 or more runs every year since the park opened in 2003.

As a final example of how Dusty keeps going over and over past things that didn't quite work out the way he had hoped, he got Walt Jocketty to sign our old buddy Jacque Jones (after Jacque had hit .147 last year in 116 AB between Florida and Detroit). Jones is 2-for-26 this spring, both singles.

They're the darling pick of the experts, but I say they'll have trouble winning more games (74) than they did last year. They've had eight straight losing seasons. Make it nine this year, and fourth place.