You'll recognize the "nickname" in the headline as one that a certain member of this website has bestowed on Alfonso Soriano. The "hack" hacked his third homer of the spring and also singled, but a massive blowup by reliever Jose Ascanio, who allowed five Giants runs in the ninth, turned what appeared to be an easy 5-3 win into an 8-6 loss, even though the Cubs scored a run in the last of the ninth.

Nick Noonan, a Giants farmhand who won't turn 20 until May and who spent last year at Augusta in the South Atlantic League, hit a grand slam off Ascanio, whose ticket to Iowa was likely punched today, though he probably had little chance of making the roster anyway. This makes that cut that much easier for Lou and Jim. Chad Gaudin and Luis Vizcaino weren't that good, either, but at least Vizcaino struck out the side in his inning.

A HoHoKam Park record crowd of 13,024 (was there someone here talking about attendance problems? That's a huge crowd for a Wednesday) brought the total spring attendance so far to 120,130, or 10,010 per game, with seven home dates remaining, almost all of which should be sold out or close, especially if the weather remains as spectacularly nice as it was today (I understand it's supposed to cool off over the weekend, then warm up again next week).

Tim Lincecum, who started for the Giants, must have been working on something today, because the Cubs hit him pretty hard and he was also wild, walking four (while striking out six) in 3.2 innings of work. Meanwhile, Ryan Dempster was outstanding, allowing only four singles and a walk in his five innings of work, striking out four. He should be right on target for his first start in the season's second game in Houston. Mike Fontenot had two more hits, raising his average to .391, and Joey Gathright also had two hits, and one of them hit Giants 3B Pablo Sandoval in the face; Sandoval had to leave the game.

Tomorrow, Aaron Heilman faces the Mariners' Gaby Hernandez at Peoria. Heilman was a Mariner for 47 days, between December 12 and January 28. Wonder if he and Garrett Olson will swap frequent-flier mile stories from this past offseason?

Finally, this photo has nothing to do with the Cubs, but I thought it was hilarious, so I wanted to post it here anyway. Today, Manny Ramirez helped some Australian cricketers tape a promotional spot for DirecTV's cricket coverage at the Arizona Cricket Club in Gilbert. No, I am not making this up. The mind boggles: 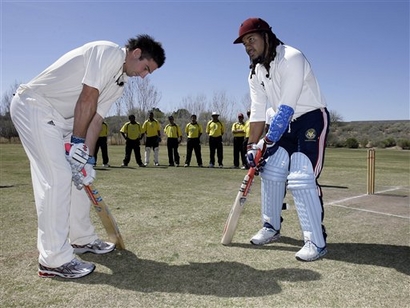