Share All sharing options for: Know Your Enemy: Houston Astros

Those are really the only two words you need to know about the 2009 Astros, because Roy Oswalt is really their only starting pitcher. And no team has ever made the postseason with only one starting pitcher. (Well, some of those 19th Century teams did, but you know.) 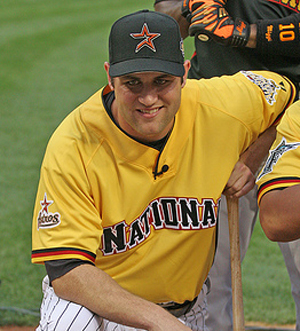 Some call him "Fat Elvis". You can see why.

Of course, that's an exaggeration. Roy Oswalt isn't going to start all 162 games for the 2009 Astros, but they're going to wish they had his clone for the 128 or so he doesn't start, because the rest of their rotation depth chart includes: Wandy Rodriguez, Brandon Backe, Brian Moehler, Russ Ortiz and Mike Hampton. Now, the back end of that group (Moehler, Ortiz and Hampton) might have looked pretty good... if this were 2000 instead of 2009. But those guys are old and injury-prone (for that matter, so is Backe, and he had a 6.05 ERA last year to boot) and so the Astros are going to give up a ton of runs; Wandy Rodriguez may win the occasional game for them with his junk-lefty stuff. It doesn't matter that they have an outstanding closer in Jose Valverde, either, because the rest of their bullpen is... pretty bad. LaTroy Hawkins has actually reclaimed his career as a good setup man, but he may not have much to set up after guys like Wesley Wright, Tim Byrdak and Chris Sampson get done with the middle innings.

The Houston offense, which took a big hit after Carlos Lee went down in midseason last year, barely scored more runs in 2008 than the Reds, who I profiled yesterday. But with guys like Lee, Lance Berkman, Hunter Pence, and Miguel Tejada leading the way, the Astros offense ought to be at least in the middle of the pack in the National League. With C-Lee healthy this year, they ought to better their 2008 total of 167 home runs in their hitter-friendly ballpark.

There's another factor here that I pointed out to people last spring and no one believed me. The 2007 Arizona Diamondbacks had a 90-72 record and made the playoffs despite having a negative run differential (712-732). That's almost impossible to do, and they outplayed their Pythagorean W-L projection by 11 wins. Teams that do that tend to seriously regress in the following year, and the 2008 D'backs were no exception; they won 82 games, exactly dead on their Pythagorean numbers.

The 2008 Astros did almost exactly what Arizona did a year ago. They scored 712 runs, and allowed 743, but went 86-75, outdoing their Pythagorean projection by nine wins. Thus I would expect them to regress in 2009, and since their pitching has gotten markedly worse, it could be by ten wins or more. (Their offense didn't look so great, either, in that two-game series moved to Milwaukee against the Cubs, in which they got a grand total of one hit.)

Now that Puerto Rico is out of the WBC, Ivan Rodriguez is expected to sign with Houston. This will have ... absolutely no effect on the Astros, as Pudge is several years (and quite a few pounds, apparently) away from his best seasons. J. R. Towles was pretty bad last year after he won the starting job in spring training, but with Houston going nowhere this year, they really ought to just put Towles out there and let him play. He hit well after he was demoted to Triple-A and is only 25.