In a game that meant less than the usual spring training meaningless result, the Cubs beat the Mariners at Peoria this afternoon 9-2, on a day that might have been the warmest yet this spring (84 degrees at game time, temperatures were supposed to touch 90 today).

Here's how meaningless this one was: the only player in either starting lineup who is a likely everyday starter was Ronny Cedeno. Yes, our good ol' ONEDEC, who went 0-for-2 before leaving for a pinch-runner.

Aaron Heilman started and allowed one unearned run, but according to this midafternoon missive from Paul Sullivan, he appears ticketed for a middle-relief role, with Sean Marshall claiming the fifth starter's spot:

Manager Lou Piniella is close to crowning Sean Marshall as the fifth starter, a no-brainer decision based on Marshall's 0.63 earned-run average.

That decision could come by Friday, giving Aaron Heilman a chance to move back to the bullpen, where he'll likely serve as the seventh inning bridge from the starter to the set-up man. 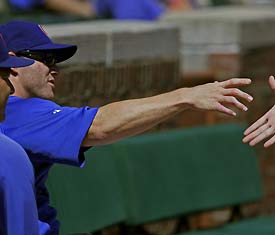 I'm on board with this one. Heilman handles LHB reasonably well, and since Lou doesn't generally use LOOGYs (or use them properly, anyway), I think this solidifies both the bullpen and the rotation. Sullivan also said that Koyie Hill is closing in on the backup catcher spot; Hill had another hit today and is hitting .406 for the spring. Here's a cubs.com profile of Hill posted today that explains a little more about how he got hurt, how his fingers are now "built for baseball", and how he's worked very hard this spring on improving his hitting:

"It's full bore," Hill said. "The only time I notice it is if you do a ton of hitting in a day and I feel I'm fatigued. It takes quite a bit [to notice it now]."

The darling of many on this site, Micah Hoffpauir, hit another home run today (Jake Fox went back-to-back-jacks with Micah), giving him four on the spring with 17 RBI, which put him past Josh Hamilton and Ryan Howard to lead all major leaguers. Still... it's spring stats, everyone. Here's a spring training stat line from a recent Cub:

Know who that was? Scott McClain in 2004; he was second on the Cubs that spring with the 16 RBI (D-Lee led with 17). What did that get McClain? A trip to Iowa. Last year he became the oldest player in MLB history to hit his first major league HR when he homered for the Giants on September 3 vs. Colorado. Point is, I think Hoffpauir is McClain. And at least McClain could play third base, after a fashion. Hoffpauir's not really an outfielder, though Lou keeps trotting him out there.

I think the Cubs would still be better served with Corey Koskie than Hoffpauir, though Koskie had to leave today's game in the third inning because he "wasn't feeling well" (from Gordon Wittenmyer via Twitter), not a good sign at all.

Tomorrow at Mesa, Rich Harden faces San Diego's Kevin Correia. Correia, a former Giant, was signed to a minor league deal by the Padres last December -- and he might wind up as their #3 starter. The game will be available on WGN radio.