It's A Beautiful Night For A Ball Game

Share All sharing options for: It's A Beautiful Night For A Ball Game 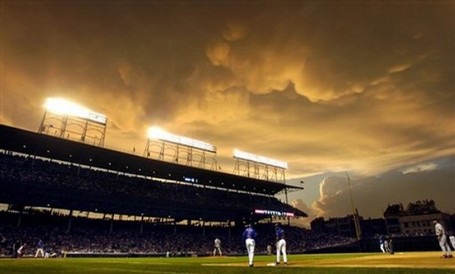 There's been some discussion here, and speculation elsewhere, about whether the Cubs, under the upcoming new ownership, might petition the city of Chicago to change the ordinance that now limits them to 30 home night games.

I did a little research into comparisons with what other teams do; the following list is what each team has scheduled for 2009 at home (note: there were a handful of TBD game times, mostly Saturdays and Sundays, which for this purpose are assumed to be day games), listed in order by number of night games:

The average number of night games per team including the Cubs is 55; excluding the Cubs' total, the other 29 teams average 56, a little more than 2/3 of their home schedule. Some teams, like the Rangers and Marlins, simply can't play many day games in the summer heat, which is why they have a little more extreme day-game total; at the other end of the list are more traditional, old-line franchises like the Tigers and Yankees (the Toronto total of only 48 night games is a bit of an anomaly). It's only partly about convenience for Cubs players (more on this below).

Here's what this discussion is really about. It's not about game attendance -- the Cubs played to 97.7% of capacity in 2007 and 99.1% in 2008 -- and it's not really about the neighborhood, either, because when push came to shove, the Cubs did get their way when the 2002 ordinance superseded the original 1988 law that at the time limited the Cubs to 18 home night games for the first 15 seasons.

What this is all about is TV ad revenue and ratings; as someone in the TV business, I can speak to that. Obviously, more people are available as eyeballs for TV at night than during the afternoon. Thus, ad rates are higher for night games. Given the need for additional revenue sources, it makes logical sense for the Cubs to increase their night game total, particularly if they are going to, as has been rumored, attempt to start a YES Network style Cubs TV channel. So let's take a look at some of the dilemmas they may encounter.

Point: More night games in April, May and September mean that more families (and college students) could attend, in the time when schools are in session.

Counterpoint: Playing more night games in April, May and September means playing more games in colder weather, less conducive to good production out of your players.

Point: More night games in the summer months are easier on players, because you play fewer games in extreme heat, as well as making it easier returning from long road trips.

Counterpoint: Many people travel during the summer and don't stay home in the evenings to watch TV since it's so nice out.

Point: Related to the previous point, the Cubs occasionally have had to play Friday home day games after Thursday night road games, since the ordinance doesn't permit Friday night home games; this has occasionally forced players to sleep in the clubhouse.

Counterpoint: There isn't one. This is a valid complaint, and one thing the Cubs need to ask for when they ask for more night dates.

Counterpoint: I don't think the Cubs will get anywhere here. In some ways, it doesn't make sense to televise more Saturday night game, because Saturday nights are typically low-rated TV nights, when many people are out and not home watching TV. Second, many of the other Wrigleyville businesses -- particularly Metro Chicago, which books a lot of music acts on Saturday nights, would have their business hurt by Cub Saturday night games (parking issues, especially).

So the bottom line is, I believe that once new ownership takes over, they should and will petition the city to amend the ordinance and allow more night games. The question is, how many more? I think extending the number to 40 -- half the schedule -- would be a fair compromise between everyone who has a stake in this issue. Further, Friday nights should be permitted, as long as those Fridays follow road trip games on Thursdays (it shouldn't even necessarily have to be a Thursday night -- sometimes a long flight back after a Thursday afternoon game can be just as debilitating). With the triangle building likely to be constructed when new ownership takes over, providing the parking spaces that the Cubs promised when the bleachers were expanded, that should help to ease any neighborhood concerns.

40 night dates should be enough to help the Cubs with any team issues, provide 10 more dates' worth of nighttime TV ad revenue, satisfy neighbors' concerns (40 nights a year is a little less than 11% of the calendar year), and still keep enough daytime dates to carry on the Cubs' long daytime baseball tradition.

The game thread for today's spring training game vs. the Diamondbacks will be up at noon CST.