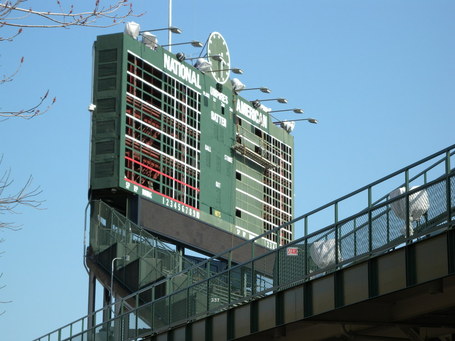 They're painting the scoreboard at Wrigley Field this weekend; the National League half, as you can see, is done, with the AL half yet to go. Meanwhile, this afternoon at Camelback Ranch, Cubs hitters splattered the berm with home runs -- three of them, from Alfonso Soriano, Milton "Gameboard" Bradley (his first of the spring), and Jake Fox. Fox also had three hits and five RBI. The man can rake -- if only he could play third base.

Meanwhile, Sean Marshall painted corners well with his breaking ball, allowing five hits and two runs in five innings with three strikeouts. Marshall's only real mistake was a HR ball he served up to Josh Fields in his fifth and final inning of work. I figured he might be ready to go six today, but perhaps that'll be saved for his next outing. He should have at least two more starts before the regular season begins. Meanwhile, Luis Vizcaino threw an efficient inning, striking out two and perhaps increasing his trade value.

The Cubs beat up on several White Sox pitchers, 13-2, including their #1 starter Mark Buehrle and one of their top setup men, Scott Linebrink.

We've already discussed Corey Koskie's retirement from his comeback attempt, but I thought it worth posting that link for this quote within:

He took himself out of Thursday’s game against Seattle in the third inning. He said Saturday that he asked himself after diving for a grounder: "What am I doing out here?"

Kudos to Koskie for giving it a shot, and even more props to him for realizing that it just wasn't realistic after all he's been through. He's still young in outside-of-baseball terms and I wish nothing but the best to him and his family.

That leaves the Cubs without a true backup 3B -- today Mike Fontenot played the position -- and I would suspect Jim Hendry is scouting various teams for possible help. I will again float the Chad Gaudin-for-Maicer Izturis swap that I posted about last Sunday. It makes a great deal of sense for both teams; the Cubs need that versatile backup infielder and the Angels have pitching depth problems. The contracts are almost a match ($2m for Gaudin; $1.6 for Izturis). I hope the Cubs are seriously considering this possibility.

In tomorrow's home game vs. the Mariners -- where yet another attendance record could be set -- the guy who so many of you wanted the Cubs to get last winter, Erik Bedard, will throw for the Mariners against Carlos Zambrano. The game will once again be on CSN Chicago -- this time with Len & Bob.