By suggestion, I'm continuing last week's series which began with a look at each of the Cubs' NL Central rivals. Because the Cubs play the other NL teams fewer times than the Central teams, this post will take a brief look at each of the NL East clubs, in my predicted order of finish. 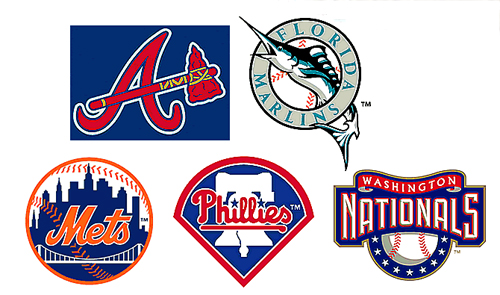 1) NEW YORK METS Maybe this is the kiss of death for them (and couldn't happen to a nicer team), but I'm predicting that the Mets will break their jinx of the last couple of years and finally win the East and qualify for the postseason. Last year, they were anointed World Champions by some of the so-called experts before a single pitch was thrown, mainly on the acquisition of Johan Santana, who apparently was going to go 34-0, win all the playoff games, and personally construct Freedom Tower in NYC with his bare hands.

Santana's 16-7, 2.53 season was good, placing him third in Cy Young voting, but the team's downfall was a horrible bullpen. They have addressed that with the acquisitions of Francisco Rodriguez and J. J. Putz. Things don't always work out the way you think they will, but these relievers should go a long way toward saving what the Mets' admittedly thin rotation (after Santana) starts. Mike Pelfrey is good, but the rest is either coming off injury (John Maine, with an unsightly 10.38 spring ERA) or who-knows-what-guy-will-show-up-this year (Oliver Perez).

The Mets' offense, which finished tied for second (with the Phillies) in the NL last year behind the Cubs, is again solid. Left fielder Daniel Murphy, who hit well in 131 AB, will provide yet another big bat if he can do this for a full season (and is having a good spring, hitting .364). At age 37, Carlos Delgado may be primed for decline, but he didn't show any signs of that a year ago, posting an .871 OPS with 38 HR and 115 RBI.

The Mets will win 90-92 games and the division title.

2) PHILADELPHIA PHILLIES None of the last eight World Champions has repeated. Since 2000:

That's only two champions that even got as far as the LCS, and two others finished with losing records. Not a very inspiring example for the 2008 Phillies. However, they are still a very strong team and I'm picking them to be the NL Wild Card.

They return almost the entire team intact; the biggest change is free-agent Raul Ibanez, signed to replace the departed Pat The Bat Burrell in left field. This will have little effect other than to have a bad left fielder bat lefthanded instead of righthanded. Phillies fans have to be worried a bit about their pitching ace, Cole Hamels, but as of Saturday he was throwing with no pain.

The Phillies, as noted above, tied with the Mets for 2nd-most runs in the NL. The offense should generate the same power and run-scoring ability this year, and their bullpen is solid, but to expect Brad Lidge to have another perfect season is unlikely. Ryan Howard has 6 HR in the spring and reserve infielder Jason Donald has 20 RBI.

Prediction: around 90 wins, 2nd place, wild card. This year the Mets beat them out.

3) ATLANTA BRAVES I'm not sure what to make of this team, which has finally broken all ties from the Maddux/Smoltz/Glavine years. They signed Derek Lowe to be their #1 starter and traded a bunch of prospects to the White Sox for Javier Vazquez. I keep waiting for the other shoe to drop for Lowe, who will be 36 in June; but he's been a solid starter for seven seasons and hasn't missed a start, so the Braves at the very least have a rotation anchor. I really like Jair Jurrjens, who is just 23 and had a fine year last year. So pitching should be an Atlanta strength this year -- presuming Mike Gonzalez comes back from injury to close. They don't really have many other choices there.

In the outfield, the Braves are trying to corner the market on Andersons, with ancient Garret Anderson manning left field and (probably) Josh Anderson in center, though Gregor Blanco will get a lot of playing time. Key performers will be SS Yunel Escobar and RF Jeff Francoeur. If those two fail, there will be major holes in the Braves lineup. Francoeur is hitting .368 this spring with only one strikeout in 38 AB, so maybe he's finally reached the potential he flashed in his half-rookie season in 2005. Remember, he has over 2000 major league AB but is only 25.

4) FLORIDA MARLINS Every year, people dismiss the Marlins, and every year, they seem to make a run at the wild card, only to fall short. They could do the same this season, but this is an extremely young team and so it could run the gamut from contention to last place. Hot prospect Cameron Maybin, acquired in the Dontrelle Willis deal, will start in CF. He'll be 22 just before Opening Day and will have to fulfill his promise for the Marlins to accomplish anything this year. Jeremy Hermida, who I was interested in seeing the Cubs acquire, will start in LF; at 25 he, too, has a chance to be an offensive force, but must step his game up to the next level. He is leading Marlins regulars in spring stats with a .368 average and 10 RBI. Dan Uggla and Hanley Ramirez return as the DP combination; you'll get the usual combination of power, speed, strikeouts, flashy plays, and errors at the worst possible time from them.

The rotation is anchored by (sigh!) ex-Cub farmhand Ricky Nolasco, who had a breakout season in 2008. There are a number of very young pitchers, both starters and relievers, who will have to step up if the Marlins are to do anything in 2009. Currently listed on their depth chart as closer is Matt Lindstrom, who has five career saves. Lindstrom doesn't throw particularly hard (43 K in 57.1 IP last year), but allowed only one homer all season.

Prediction: fourth place, but they could flirt with .500, mainly because of the...

5) WASHINGTON NATIONALS Decades ago, when the old Washington Senators were in the American League, a slogan was coined: "Washington: first in war, first in peace, last in the American League." I won't go into any of the political commentary (and don't you, either, please) regarding the current state of Washington the city, but the current baseball team fulfills the last portion of that saying, substituting "National" for "American".

The Nats seemingly have everything going for them -- a new park, solid ownership and a fanbase that allegedly was begging for a major league team since the 1970's. And instead, what they have is a collection of kids and castoffs.

Sure, Adam Dunn will hit a few homers. And sure, John Lannan is a decent pitcher -- he'd be a #2 or #3 starter on many teams. This year, Joel Hanrahan will be the one racking up whatever saves the Nats do get (although, Jesus Colome has four spring saves while Hanrahan is off with team USA in the WBC, and has thrown well this spring, with a 1.13 ERA and no walks in 8.1 innings). The most intriguing player, to me, on this year's Nats is Shairon Martis, a 22-year-old righty from Curacao who the Nats thought so highly of that they wouldn't let him pitch for the Netherlands in the WBC. Martis is listed as the Nationals' fifth starter, but by midseason he might be the best pitcher in their rotation. They also just signed Joe Beimel, one of the better lefthanded relievers in the game -- not that he's going to have much to relieve.

The 2008 Nats were 14th in runs scored and 14th in runs allowed. They have some good hitters -- Dunn, Ryan Zimmerman, Nick Johnson (until he gets hurt again). But they will need to score more runs to have any chance of getting out of last place. The only one of their (semi) regulars having a decent spring is Austin Kearns (.333), but he's leading the team with only 7 RBI.

Prediction: last place, although they might have enough firepower to get under 90 losses.