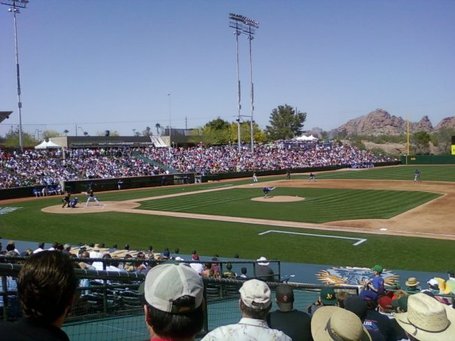 Ryan Dempster delivers a pitch at Phoenix Muni, Monday, March 23, 2009; photo by Al
Click on photo to open a larger version in a new browser window

That was the sound I heard, sitting with my friend Dave behind the Cubs dugout, as Neal Cotts came into the dugout after being removed following giving up four hits and a walk and being charged with three runs in a ninth-inning throwaway appearance in the Cubs' 20-5 blowout of the A's, which, coincidentally, ended at 4:40 pm -- twenty to five. (Traffic was messed up both getting in to this game, due to a serious car accident in Scottsdale, and out, because of rush hour, and I had to make a stop, which is why this recap is delayed.)

These are the things you don't see on TV or get out of Gameday or even a pitch-by-pitch description of the game. The little things, perhaps unnoticed by many, that define who major league baseball players are. Even in a meaningless spring game the Cubs were leading by 18 runs going into the inning, Cotts was mad at himself for getting pounded. Who knows whether he just didn't have his command or was working on something that just didn't work -- whatever the case, you could tell that Cotts cared about failing. And that's as it should be. I know that Cotts is one of the hardest workers on the team and often runs around the park after even spring games. Dave said that Cotts has thrown very well this spring, so hopefully today was an aberration.

It was about the only thing that didn't work for the Cubs today; they pounded out 24 hits, including four from Paul Bako, who didn't even start the game. Bako and Derrek Lee homered; Lee hit the ball with authority in his first four at-bats and looked much better at the plate than he has at any time this spring. That's a very good sign. Ryan Theriot also had three hits and hit the ball solidly. And Micah Hoffpauir had two doubles and made an outstanding diving catch in right field. Yes, really. (Of course, he'd probably dive for the same ball 99 more times and not catch it.) For today, I was impressed with what I saw from Micah. He does seem to have a more level swing than he had last year, and if he can improve his plate discipline... well then, maybe I'll wind up being wrong about him.

Ryan Dempster looked solid, as I twittered during the game, but almost as soon as I had done that, he started losing his command. Removed before finishing the fifth inning, he struck out six, but I don't think either he or Lou was happy with his final inning. Kevin Gregg and Aaron Heilman also threw today; Gregg didn't have his best stuff in relief of Dempster, but got out of his inning, and Heilman gave up a pair of singles and a run-scoring sac fly in his inning of work.

It was just nice to get to see real baseball today, despite the fact that the game ran an unsightly three hours and thirty-six minutes, perhaps expected in a game that featured 35 hits, nine walks, three hit batters and a Jake Fox error that allowed Matt Holliday to reach base in the second inning, before Dempster induced Jack Hannahan to hit into a nicely-turned inning-ending double play. Phoenix Muni is a throwback field with no grass berm, so I sat behind first base (where the photo above was taken) until my friend Brian called and said I could come sit over by Dave behind the dugout. More throwback: no scanners for the tickets, they actually ripped the ticket, which I haven't had happen in about four years, and so I have an actual ticket "stub" from today's game.

Rumors heard: Luis Vizcaino, who threw a decent inning today, is still on the block and perhaps today's outing will induce a scout from some team or another to file a positive report and acquire him. David Patton, who didn't have command today but pitched a scoreless inning anyway, has a real chance to break camp with the team, and if he doesn't, he will get claimed on waivers by either the Nationals or Padres and make someone's major league roster.

Tomorrow, Chad Gaudin, another pitcher who has to produce to make the roster, will get the start against Colorado's Franklin Morales. Other Rockies pitchers at Mesa tomorrow will include right-handers Manuel Corpas and Ryan Speier and lefties Alan Embree, Greg Smith and our old buddy Glendon Rusch.

The WBC championship game is about to begin as I write this, about 6:30 pm MST (8:30 pm CDT, ESPN) -- so here is MLB.com Gameday for Japan/Korea, and we have already learned that Kosuke Fukudome will not start for Japan tonight.