With today being an off day, at least this early in the morning there's nothing really new to report from spring training. There may be more roster cuts announced soon, but that could happen later in the day or early tomorrow, since the Cubs don't play till tomorrow night vs. the Giants at Scottsdale.

With that, I have a couple of baseball/Cubs books that I've been meaning to review, but haven't had time in the crunch of spring training. Here's the first.

People are running out of book titles -- there are two recent books out with this title (The other one is called "Chicago Cubs Yesterday And Today", the difference being the word "and" instead of the "&" -- the other book is also similar in format and content). The one reviewed here has the cover pictured, with a photograph from the 1940's; it appears to be a black & white photo from the era that was colorized. That's not a knock on the photo, which is attractive, just an (apparent) fact. Saul Wisnia, the author, is a Boston-based writer currently working on a history of the Boston Braves, but he knows his Cubs history, too. 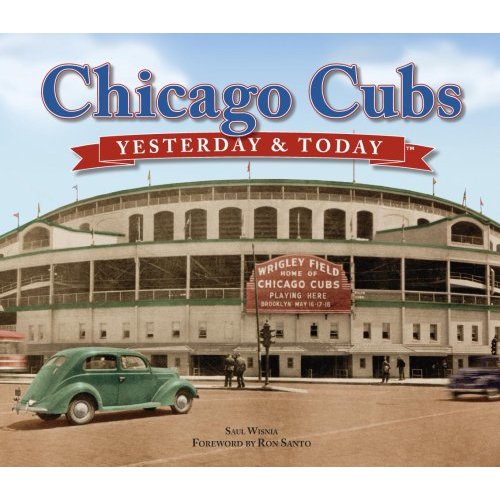 Naturally, I had to figure out when this photo was taken. It didn't take too long to discover that the May 16-17-18 series against the Dodgers took place in 1949. The series followed a 12-game road trip (longer homestands and trips were more common in those days of train travel), so it could have been taken any day before May 16. What we do know from the schedule link above is that the May 16 game must have been rained out -- there's no result for that day -- and the Cubs lost the other two games, 8-5 and 14-5, dropping to last place; the rest of 1949 they never placed higher than seventh.

The beauty of this coffee-table size book is not the nuts-and-bolts history of the team; it's the large and colorful photos, many of which I had never seen before. It details eras in Cubs history and each section has a description of what a day at the ballpark would have been in each era. Photos include a wistful-looking photo of Buck O'Neil, a Cubs coach in the College of Coaches era; to this day it's a sad statement that he never got a chance to be Head Coach, as the others did in the rotation. There's a photo of the phantom 1969 World Series tickets (sigh...) and many others, from players and owners to ballparks.

There will be a new version of this book out sometime this spring which will include pages on the 2007 and 2008 seasons, but I have been informed by the author that it may be in a smaller format and have some content eliminated, so if you want to see the photos in all their glory now, you can order one from this amazon.com link.

There are illustrations of tickets and scorecards and other souvenirs, some that I have never seen anywhere else. So, I highly recommend "Chicago Cubs Yesterday & Today" for the photos and illustrations alone.