Share All sharing options for: Good News From Fitch Park

Rich Harden threw 63 pitches (42 strikes) in throwing four effortless scoreless innings against a team of A's minor leaguers at Fitch Park this afternoon, in front of a crowd of around 100 family members, curious onlookers, beat reporters and other Cubs minor leaguers who stuck around from their earlier workouts and games to see a member of the Cubs' major league rotation.

Harden looked like he was just playing catch in throwing many pitches in the low 90's. All the outs were either strikeouts or fly balls -- typical Harden, who is a fly ball pitcher. He struck out four (two of them being ex-Cub Eric Patterson), including one on a nice breaking pitch for a called third strike, and allowed only three singles. He looks to be on target for resuming major league action; I would expect that he'd be slated to start Monday against the Royals at Surprise, which would also probably put him in the mix for starting one of the games at Yankee Stadium.

The video above gives you a good idea of how easily he was throwing, effortlessly and with absolutely no sign of shoulder trouble. The illness he had earlier this month was likely some sort of food poisoning, which can sap your strength, so the Cubs were smart to keep him out for a while. He appears ready to resume his place in the rotation. Here's a sequence of still photos showing his motion: 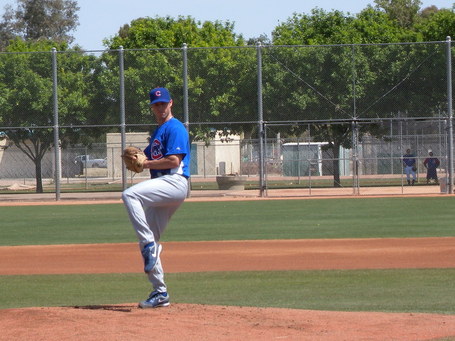 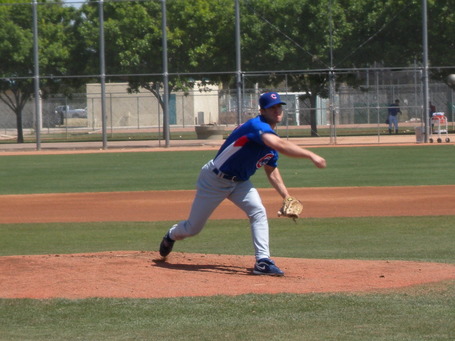 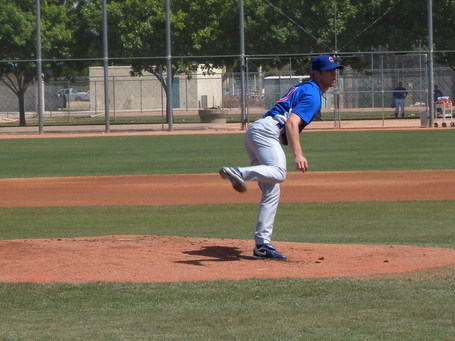 Various Cub minor leaguers who were just cut (and others) played in this game, including Jason Dubois, Doug Deeds, Richie Robnett, and Luis Rivas, who was performing this drill with a bat standing on end while in the on-deck circle: 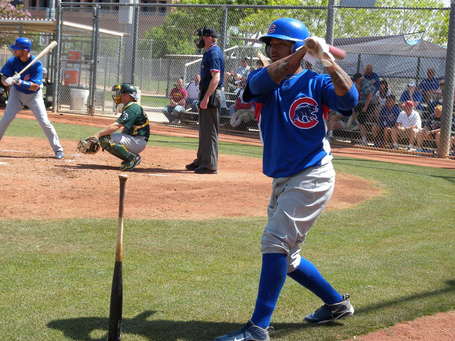 Click on photos to open larger versions in new browser windows. All photos and video by Al

I didn't stay for the rest of the game after Harden was taken out; others who were on that team included Welington Castillo and Rocky Roquet (it was a bit jarring to see him walking by me, wearing the blue "alt" jersey with his name and #34 on the back). Today's catcher was Koyie Hill (who you can see in the photo of Rivas, at bat; Hill batted in every inning to get some extra work in), the Cubs wanting to have one of the guys who might wind up catching Harden during the season, catch him today. Tomorrow night at Scottsdale, Sean Marshall will face the Giants' Barry Zito. According to Bruce Miles, Kosuke Fukudome will take batting practice tomorrow and return to the lineup on Friday, hitting second.