I'm leaving the Royals out of this AL Central preview, not because I have anything against them, but because the Cubs won't play them in this year's tour through the division in interleague play. The Cubs will play the usual home-and-home series vs. the White Sox (and for the first time ever, one of the series will not be held on a weekend, a Tuesday night-Wednesday afternoon-Thursday afternoon set at Wrigley), and visit Detroit to play the Tigers, while hosting the Twins and Indians. 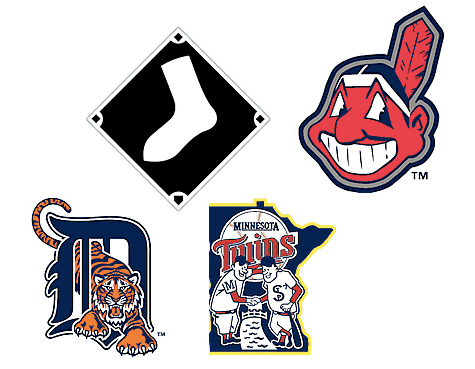 I'm picking the Royals to finish fourth. Herewith the other four teams in the AL Central with their predicted final standing position:

1) CLEVELAND INDIANS Or, shall we say, "Cubs East", as two of the most popular Cubs of recent times, Mark DeRosa and Kerry Wood, are expected to play important roles on the 2009 Tribe. DeRo will move from second base, where he's played the bulk of the last two years, to become Cleveland's regular third baseman. He's played over 200 major league games at 3B and when he did so as a Cub, he was more than competent. Cleveland will need him to reprise his season at the bat from last year, though, and they'll also need Wood to have an injury-free year at closer. Neither is guaranteed.

Those are the only two ex-Cubs on the Indians roster. Otherwise Cleveland returns their powerful lineup led by Grady Sizemore, Ryan Garko, the surprising Shin-Soo Choo, and (they hope) a healthy Travis Hafner. Cliff Lee leads the rotation, but don't expect him to go 22-3 again. They'll need Carl Pavano to step up and be what he was five years ago with the Marlins -- and that's no guarantee, either.

Still, I think the Tribe addressed their biggest issue of the last two years -- their bullpen -- and will have enough to take this division. SS Jhonny Peralta is having the best spring among Cleveland regulars, hitting .429 with 10 RBI.

This is a 90-95 win team that should take this division.

2) MINNESOTA TWINS The Twins have had the best field management in baseball over the last two decades. Tom Kelly always seemed to get the most out of whatever talent he got, winning two World Series, and his successor, Ron Gardenhire, has won four division titles (and nearly sneaked another one in last year). Credit to their entire organization.

This year's Twins return mostly intact from 2008, with the powerful Justin Morneau leading a strong offense. The Twins do have worries about catcher Joe Mauer, who has back problems and may not be ready for Opening Day. In keeping with this theme, the Twins signed free agent Joe Crede to play third base -- Crede's a fine player, but back trouble was what made the White Sox leery about re-signing him, and playing with that on one of the three fake-turf parks left might make Crede a less than full-time player.

If the Twins' young rotation can get the ball to him, Joe Nathan remains one of the best closers in the game; he has posted 200 saves over the last five years since the Twins stole him in the A. J. Pierzynski deal with the Giants.

No Twin hitter is having a truly outstanding spring, though Delmon Young has 3 HR and backup infielder Brian Buscher is hitting .361. Starters Kevin Slowey (1.88) and Francisco Liriano (2.95) are off to good spring starts.

The Twins could challenge for this division title if everything breaks their way, but that's a lot to ask.

3) CHICAGO WHITE SOX I'm going to try to be nice here, to give credit where credit is due, and not to give too much ammunition for Dr Crawdad to quote three years from now. Credit: the White Sox won three straight elimination games against three different teams (the last day of the scheduled regular season vs. Cleveland, a makeup game vs. Detroit, and a 1-0 tiebreaker vs. Minnesota) to make the playoffs, upon which they were dispatched quickly by the Rays. And that's the last we'll see of the White Sox as contenders for a while; they dumped Javier Vazquez, who was sort of the Jason Marquis of the South Side -- a guy who drove his team's fans nuts, but when all was said & done he had made all his starts and thrown 200+ innings. Without him, the Sox are dependent on the ancient Jose Contreras and the immense Bartolo Colon as their #4 and #5 starters, and though their top three are pretty good (Mark Buehrle, Gavin Floyd, John Danks), the nether regions of the Sox rotation, and bullpen beyond closer Bobby Jenks, are pretty shaky. The Sox signed Octavio Dotel and Scott Linebrink, at considerable expense, to set up Jenks, and both were prone to meltdowns. The Cubs took advantage of that in the sweep at Wrigley last year.

The Sox will also miss Crede's bat and glove; Josh Fields is not a very good third baseman and he strikes out. A lot. They're also missing a true center fielder, and Paul Konerko and Jim Thome are getting older. Konerko is having a good spring, though, hitting .426 with 4 HR and 12 RBI.

4) KANSAS CITY ROYALS As mentioned above.

5) DETROIT TIGERS How the mighty have fallen. When the Tigers won the AL pennant in 2006, having improved 52 wins in only three years after their abysmal 43-119 season in 2003, Jim Leyland and Dave Dombrowski were hailed as genuises, and the Tigers were seen as a possible new dynasty. The next year Detroit missed the playoffs even though Curtis Granderson emerged as a star and Magglio Ordonez hit .363, the highest single-season batting average for a Tiger in 70 years (Charlie Gehringer, .371 in 1937). The offensive onslaught continued in 2008, with Detroit finishing fourth in the AL in runs with 821 -- but the pitching staff collapsed, allowing a third-worst-in-the-AL 857 runs, 60 more than in 2007 and 180 more than in 2006 when their pitching was the best in the AL.

And that's the issue with the 2009 Tigers that is going to send them to last place once again. Detroit acquired Edwin Jackson from the Rays, and he was once one of the top prospects in the Dodger organization. He did have a good year in 2008 in Tampa, but he may be the Tigers' #1 starter. Will Jeremy Bonderman and Justin Verlander ever get back what they had in 2006? Or will Dontrelle Willis remember how to pitch? The big hope for the Tigers is 20-year-old Rick Porcello, the Tigers' #1 pick in the 2007 draft. But he has only one year of pro ball and is probably best not served coming to the majors this quickly. Ex-Arizona closer Brandon Lyon will close, but if formerly solid setup men Fernando Rodney and Joel Zumaya can't get their 2006 form back, the Tigers won't be able to get the ball to Lyon very often.

And this isn't even mentioning that Adam Everett, whose average, OBA and SLG have all declined for four straight years, is now Detroit's starting shortstop.

Gerald Laird, who the Tigers picked up from the Rangers in the off-season to be their starting catcher, is having an excellent spring, hitting .419. (But then, keep in mind that Timo Perez has as many spring HR -- 1 -- and RBI -- 5 -- as Laird).

The Tigers aren't a terrible team, but this is suddenly a tough division, where the Royals have made progress. The Tigers will have a struggle to get out of last place.

This concludes my 2009 preseason look at all the Cubs' regular season opponents. Hope you've enjoyed it and learned a few things -- I sure did while I was looking at all the various rosters. Only 11 days left till Opening Day!