Share All sharing options for: Farewell To Tucson: Cubs 6, Rockies 10

TUCSON, Arizona -- It's probably not the Cubs' absolute final game in Tucson, because the Diamondbacks and Rockies are probably there for at least one more spring (although, a year ago, did you think the White Sox would really get their way and move out?), but it's probably my last trip down I-10 to the original Arizona locale for spring training (the Indians were the first team to train there, starting in 1947, before any team had moved to the Phoenix area). 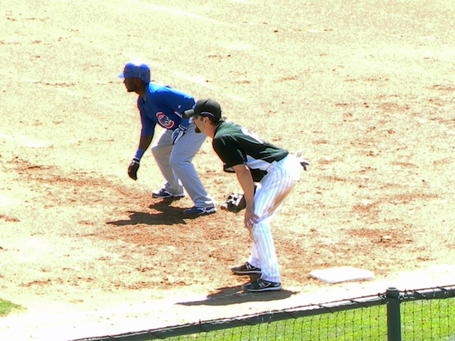 Joey Gathright leading off first after a second-inning walk

Hi Corbett Field is a throwback -- an old-fashioned minor league park first constructed 72 years ago. Parking, charmingly, is free, much of the seating beyond the bases is on aluminum benches, and there's no berm as has become de rigeur for all spring training facilities in Arizona. Today, Cubs fans made for a sellout of 8,622 (by comparison, last Sunday vs. Cleveland, the former tenant of Hi Corbett, drew 5,961), and the home team fans went away happy with a 10-6 win over the Cubs, made possible by an epic FAIL from the bullpen tandem of Randy Wells and Kevin Hart, neither of whom will come north with the Cubs. Jeff Samardzija, who still might have a shot at the major league bullpen, threw an efficient scoreless inning. I was very surprised to not see Kevin Gregg pitch today, as he has not faced major league hitters since Tuesday.

The game started auspiciously for the Cubs; after a single and a pair of walks, Reed Johnson got hit with the bases loaded: 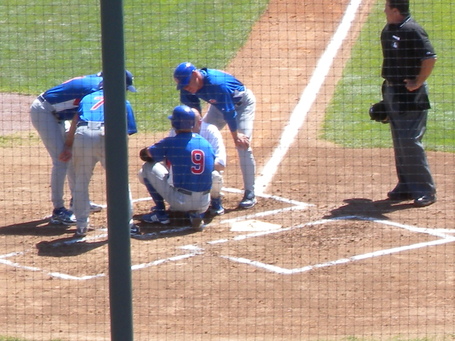 That scored a run. Unfortunately, Ryan Dempster was all over the place with his command this afternoon; he gutted out six innings without his best stuff. He walked only three, although he went to deep counts on many other hitters. He also allowed a homer to Garrett Atkins in the first inning after a walk, a single and a double had scored two runs -- and it would have been more if Joey Gathright and Geovany Soto hadn't teamed up to nab Todd Helton trying to take an extra base after he had driven in Seth Smith. The Cubs threw out three Rockies runners on the bases today, two of them by Reed Johnson in right field; he threw out Helton again trying to take second on a single, and later nailed Ian Stewart trying to tag up and take third after a leadoff double in the sixth.

What got into Reed today, anyway? Maybe that conk he took on the head in the first inning somehow strengthened his arm (at least, that's what we joked in section "H" along the first base line). The crack on Johnson's helmet was audible even 19 rows above the field. He lay on the ground for a while, eventually sitting up (shown in the photo above) and taking first base. Johnson drew two walks and played a fine outfield -- which he may have to do full-time if Kosuke Fukudome doesn't start hitting. Fukudome walked twice today, which was good, but his other three AB resulted in an infield popup and two meek little grounders. He was eventually replaced by So Taguchi.

In addition to six innings in which he kept his team in the game without his best stuff, Dempster also smacked a triple deep into the right-center field gap and scored on a single by Aaron Miles. Below, Dempster leads off third and Miles is just about to swing and drive him in: 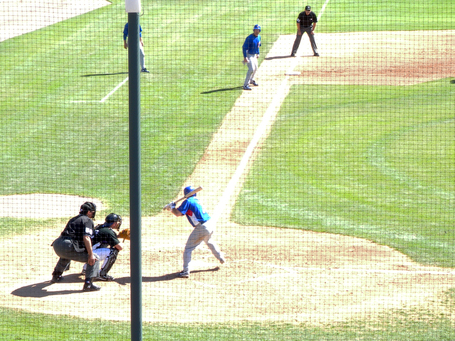 Micah Hoffpauir can hit. Man, can he hit. He hit a three-run homer to deep right field, and also doubled. I don't care for the DH rule, but with Hoffpauir on the roster, the NL could use it, because he'd be perfect for that role. He is hitting .303 and leading all major leaguers in spring RBI with 22. If only he could convince me that coming off the bench three or four times a week and having good PH at-bats is something he can do, I'd be on the Micah bandwagon. Since he's clearly destined by Lou for that role, I wish him well and hope he succeeds.

Lou, incidentally, did not accompany the team to Tucson. Word was that he was "ill" -- but really, I think the reason is that upper management didn't want him to get on the road and wind up in Mexico. Next time Lou drives anywhere, he needs, more than anything else, a good GPS. More road news: on the road back to Phoenix, I saw a SUV with the Illinois license plate "CUBS 10". I cannot report to you whether Ron Santo was in that car or not, because the car was going far faster than I was (even with a 75-MPH limit on I-10) and it was soon out of sight. It was nice to see BCB reader tucsoncubsfan at the game today (and thanks for the tip on highway construction!).

And with that, I say goodnight (tomorrow, Ted Lilly faces Cleveland's Fausto Carmona, and Kerry Wood will also pitch for the Tribe), and leave you with this thought: if you think the Cubs' schedule is bizarre, imagine being a Colorado Rockie in 2009. They will play their last 2009 spring game at Hi Corbett Field on Monday. After that, they play three exhibition games in the Phoenix area, return to Tucson to play the Diamondbacks on Thursday, April 2, go to Las Vegas to play the Mariners for a pair, and then return again to Phoenix to open the season vs. the Diamondbacks.

Ridiculous. Get the scheduling contract back to the two college professors who did it on their kitchen table. They did a better job.

Click on photos above to open larger versions in new browser windows (or tabs). All photos by Al