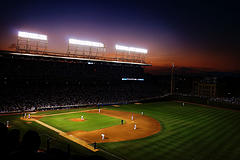 I was going to link this Paul Sullivan article on night games in today's game thread, which will post in a couple of hours, but felt this deserves its own post.

"We play so many day games, especially in the summer when every day it's hot," Ramirez said. "It takes a toll on everyday players, so I'd be in favor of increasing them to 50. They're still going to have 31 day games, so it's not like it'd be 81 night games."

Ryan Dempster likes the tradition and points out that the Cubs had a great home-field record last year, playing 50 day games:

"The tradition is cool, something unique to Wrigley Field," he said. "I think if you start going more than [30], you kind of take away from what we have here. If we get up in the 50s or 60, then you're just a normal team.

And Reed Johnson says the Cubs should have the advantage if they play more home day games, because the visiting teams aren't used to them:

Johnson said the Cubs should theoretically thrive on day games, since they play more than anyone else.

"It's really to our advantage," he said. "We know how to handle the no-batting-practice gig, and a lot of teams aren't used to that. But guys won't mind if it stays the same. We enjoy the day games at Wrigley as well."

I'm ambivalent. It is, of course, all about TV revenue, since the Cubs are selling out virtually every game anyway (last year, they played to 99.4% of capacity). Ad revenue is higher for night games. As Sullivan points out, the Cubs are limited to 30 night games a year by city ordinance through the 2015 season, so there would have to be a changed law to add some. I think that adding ten more dates -- to 40 games, half the schedule -- and allowing the Cubs to play at least 2 or 3 Friday nights a year, coming home off road trips, would be a good compromise between the desire for more revenue, and the desire to maintain at least some of the day game tradition.

Keep in mind also, that Friday and Saturday nights, the nights the Cubs claim they want to play on, are generally the two lowest-rated television nights, because those are nights that many people go out.