Share All sharing options for: Marshalling Our Resources: Cubs 4, Angels 8

MESA, Arizona -- If you thought you saw me scamper out of the way of Torii Hunter's two-run homer in the fourth inning on today's MLB Network telecast of the game, you were correct. The ball smashed onto our blanket, woke up Jessica who was napping, made a scuff on my scorecard (I wish I had a scanner here so I could show you!), clanged off the back fence, and into the hand of my friend Jim McArdle (plug coming: check out his new book "Living The Dream"), who promptly whipped it back on the field. (Wish we had a throwback ball with us.)

That was the highlight of an otherwise dreary 8-4 Cubs loss to the Angels. Sean Marshall wasn't sharp from the first batter, Chone Figgins, who reached on a wild pitch after a dropped third strike. Marshall then walked Howie Kendrick, but later got out of the inning and threw better until the fourth, when he faced nine batters, eight of whom reached base, seven of those on hits. All of the hits were hit hard, too.

Now, any pitcher is entitled to a bad outing, and Marshall has been so good this spring that I'm willing to write this one off, especially since I think the Angels are the best team in the American League (they've been playing like it all spring, too, with a major-league-best 24-6 record so far). After Marshall left, David Patton came in and gave up hits to the first two batters he faced, allowing two runs to score (charged to Marshall), but then settled down and retired the next five hitters he faced in order. In fact, the Cubs bullpen did a fine job today, throwing 5.2 innings, allowing four hits and striking out eight. Even Luis Vizcaino managed a scoreless inning with two K's, although he also walked two and let go a wild pitch.

Micah Hoffpauir smacked his sixth homer of the spring; he now has 26 RBI in 34 games, which puts him past Josh Hamilton for the major league spring training lead. Derrek Lee had three hits today, including two hard-hit doubles, raising his spring average to .314. Still worried about D-Lee? I'm not. Kosuke Fukudome singled in the first inning and then promptly got picked off -- not good. Then he tripled to deep center field in his third at-bat; that makes him 4-for-15 (.267) in four spring games, with two of the hits being for extra bases. Still too early to write him off, I think, but he'd better toss away the Ronny Cedeno Baseball Handbook he's apparently been using the last couple of days.

The elusive Kevin Gregg at last made another appearance in a major league spring game after a week's "sabbatical", and showed no sign of rust: he struck out the side in his single inning of work. There is still no decision about the last two spots in the bullpen; I maintain that the best possible solution would be to find a taker for Chad Gaudin's contract. That way, Jeff Samardzija could be sent to Iowa and Angel Guzman and Patton would have the last two spots in the pen. Barring that, perhaps the Cubs can make a deal with the Rockies to keep Patton and send him to Iowa, because I think he has a good arm and would be a useful bullpen arm, if not now, then later.

Before the game I got a tour of the press facilities at HoHoKam courtesy of Tim Sheridan, the PA announcer who maintains "Boys of Spring", a complete compendium of information about the Cubs' long tenure in Arizona (the Cubs' 31 consecutive seasons in Mesa is the longest active such streak in the Cactus League; the Giants' 29 straight years in Scottsdale is second). Tim began as the PA announcer in 1984 and has been in the booth there continuously since 1989. The facilities there are as good as most major-league parks for writers; there are also several private suites that are as nice as the skyboxes at Wrigley Field. 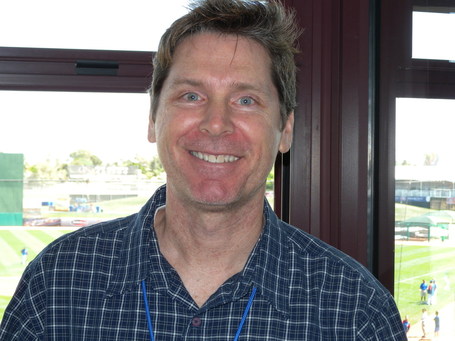 Tim Sheridan, the voice of HoHoKam Park. Photo by Al

And yet, the Cubs still are looking to upgrade. Mostly, the Cubs are seeking a better facility for their minor leaguers than they have at Fitch Park. I'll have a lot more to say about the Cubs' future in Arizona in a post I'll have up after the spring season is over.

In the meantime, there are four more "practice" games to be held, two here in the Valley and two in New York City. Tomorrow, Carlos Zambrano makes his final spring training start against A's lefthander Dallas Braden.