Before today, the last time I had been in Wrigley Field for a professional sporting event was on January 1 for the NHL Winter Classic.

Trust me on this one. The weather was better then than it was today. Today was my 28th consecutive home opener (and 33rd home opener overall), and while we've had colder ones (the 32-degree opener on April 8, 2003, for one), and wet ones (last year's drizzly loss to the Brewers), the combination of cold -- 36 degrees; a strong wind -- in from right field (what else is new in Chicago in April?); and rain and drizzle that never did stop, the conditions in which today's game was played may have been the most miserable that I can remember for an opener. (The game we dubbed the "Typhoon Game" in 2003 might have been the only one I can think of that was worse.) In fact, had this not been the home opener, I suspect the game would have been called around noon (not to mention that tomorrow's forecast isn't much better); it never did stop drizzling and Ted Lilly said in his postgame press comments, "It's very difficult to pitch under these conditions."

Difficult, maybe, but Lilly made things look easy for six and two-thirds innings, allowing only one baserunner in that time (Chris Iannetta's third-inning walk), before Garrett Atkins hit a soft single between Mike Fontenot at third and Ryan Theriot at short. That was it -- Angel Guzman, Aaron Heilman and Kevin Gregg finished up with only a couple more walks, never really being in danger, and the Cubs had a 4-0 home-opener win over the Rockies, their first home-opener win in three years. Lilly got two outs closer to a no-hitter today than he did last September 15 at Milwaukee vs. the Astros, where Mark Loretta broke up his bid with nobody out in the 7th.

Conditions being what they were, the Cubs had to play small-ball; Lilly contributed at the plate, too, drawing a walk, laying down a nice sacrifice bunt and putting his body on the line with a takeout slide on what might have been an inning-ending double-play ball. Lilly's slide forced Rockies 2B Jeff Baker to make an errant throw to first that got past Todd Helton and allowed Theriot to score the Cubs' second run. It also prolonged the inning; a walk and a single later, the Cubs had their third run.

It was also nice to see Derrek Lee hit the ball with authority today; his first hit, a double, was smacked on the nose and the single was perfectly placed. Those who continue to say Lee needs to be demoted in the lineup, quite frankly, need to see Lee play more than seven games before making decisions like this.

Little nagging injuries forced one lineup change today: Aramis Ramirez showed up with a stiff back, so Fontenot played third. (I'm guessing A-Ram wasn't too unhappy not having to play under the horrible conditions today, and Fontenot did a fine job, including catching a couple of popups in foul ground with drizzle in his eyes.) Milton Bradley's out for three games or so, according to Lou's postgame comments, and Geovany Soto should be ready to start on Wednesday, when weather conditions should be more baseball-like, and remind us less of January.

One change at the ballpark today: bleacher season ticket holders and Cubs Club "marquee" members now enter through a "VIP" entrance in the RF corner on Sheffield. This is because the Cubs have re-opened the ticket windows on Waveland opposite the firehouse for "day of game" sales. It's not the usual day-of-game sales, though; you must enter the park right after you buy your ticket and you can only buy one. Thus, if your group has four people in it and you all want tickets from this window, all four have to be in this line. There was a steady stream of people buying tickets at these windows and going in even up to the delayed game time at 2:30, so for anyone who wants to take a shot at last-minute tickets, it appears that you might have a good chance to get some from these windows.

There's a lot to like about the Cubs' 5-2 start, even though there have been shaky bullpen performances and some nagging little injuries. The Cubs are playing like the team they were last year, confident of victory but not overconfident, with a different hero each day. This is something to build on... after a well-deserved off day tomorrow. (Maybe we'll all be thawed out by then.) 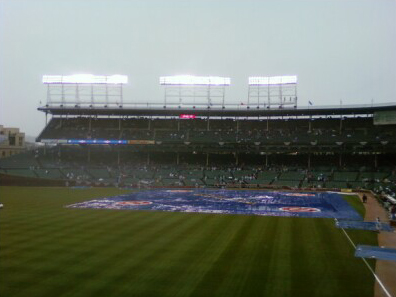 Wrigley Field as it appeared today at the scheduled starting time, 1:20 pm CDT. Photo by Al