Share All sharing options for: Late Night With The Cubs: Cubs vs. Padres Preview, Tuesday 8/18, 9:05 CT

The best thing about last night's game is that it's in the past. There are still 46 games remaining in the season; many teams have made up six-game (or four, if you are looking at the wild card race) deficits with that many games left. I am well aware of the deficiencies of this team so you don't have to tell me -- but I still wait and hope for these players to play the way they are capable of. Yes, it can happen.

So let's move on. Rob Neyer at ESPN.com wrote today about the new Rawlings S100 batting helmets that could possibly help eliminate concussions such as the one David Wright of the Mets suffered over the weekend. He quotes Jeff Francoeur:

"No, I am absolutely not wearing that," Mets right fielder Jeff Francoeur said with a laugh after seeing a prototype, as if he were being asked to put a pumpkin on his head. "I could care less what they say, I'm not wearing it. There's got to be a way to have a more protective helmet without all that padding. It's brutal. We're going to look like a bunch of clowns out there."

A bunch of clowns? Really? Have you seen this helmet? It looks like this: 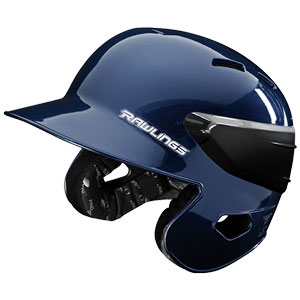 Looks like an ordinary batting helmet with extra padding. I'd think players would be racing to try these, especially after what happened to David Wright.

And, in the wake of yesterday's $15 million deal to Stephen Strasburg, ESPN's Jayson Stark has some ideas on how to fix the amateur draft.

That 30.86 ERA for Carrillo is not a misprint. He has made one major league start, last Thursday vs. the Brewers in Milwaukee, and gave up eight earned runs (including three homers, one to his former college roommate at the University of Miami, Ryan Braun) in 2.1 innings. May the same be true tonight. Carrillo is a Chicago native who attended Mt. Carmel High School (alma mater of Donovan McNabb, among other pro athletes) and was San Diego's #1 draft pick (18th overall) in 2005.

Ryan Dempster had one of his best starts of the year vs. the Padres on May 14 at Wrigley Field, throwing seven innings, allowing three hits and two runs. Players currently on SD's active roster are hitting .175 vs. Ryan; Adrian Gonzalez has homered off him (as he has off just about everyone these days) but that is his only hit in eight AB against Dempster.

Today's game is on WGN and TV4 San Diego. For other games today see the MLB.com Mediacenter.