Just How Big Will The Cubs' Triangle Building Be?

Share All sharing options for: Just How Big Will The Cubs' Triangle Building Be?

Much has been written about the Cubs' Triangle Building, which will be constructed on the lot immediately west of Wrigley (it's triangle-shaped, thus the name of the building). This photo, taken on Saturday, January 9, was taken from the southeast corner of Waveland and Clark, which will wind up being the northwest corner of the building. A portion of the lot is now taken up by the skating rink which will remain open for about another month.

The building will be nearly as tall as the upper deck -- five or six stories -- and possibly have space underground, too. It doesn't appear that large when you look on a map, but the lot is about half the size of the footprint of Wrigley Field. This will be a large structure. Here are some renderings the Cubs posted on their website several years ago.

Shameless promotion: I will have a detailed article about what the Cubs could put in this building, in the 2010 Maple Street Press Cubs Annual, which will be out next month. 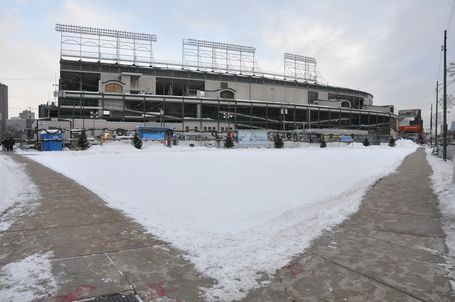 Click on image to open a larger version in a new browser window. Depending on the size of your display and browser, it may require some scrolling. If you find it to be too large, click here for a smaller version. BCB photo by David Sameshima