Share All sharing options for: Cubs Historic Photos: 15th In A Series

This one's a little different as it clearly was not taken at Wrigley Field. It shouldn't take you too many guesses to figure out who these players are and when the photo was taken.

Remember, if you want a print (without watermark) of this photo, or of any of the photos in this series, contact Leo Bauby at this email address. 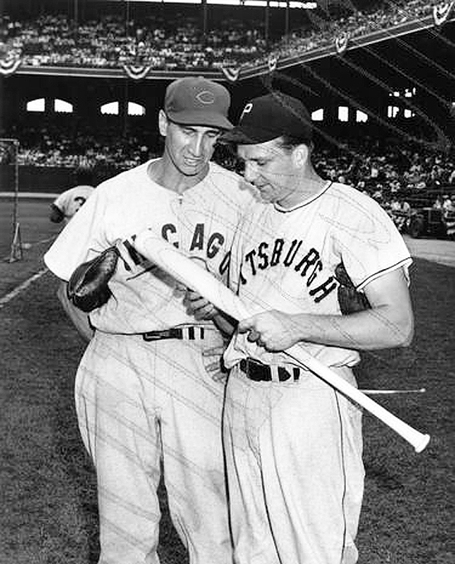 If you're familiar with old ballparks at all, the archways in the background should have given it away -- that's the old Comiskey Park, and the only time these two players would have been together at that park was the 1950 All-Star Game on July 11, 1950. The Cub is Andy Pafko, who was traded to the Dodgers less than a year after this photo was taken in one of the worst deals the Cubs made in that era (Pafko, who had played in the 1945 World Series for the Cubs, went on to play in three more, one for the Dodgers and two for the Milwaukee Braves, while the Cubs... didn't). The Pirate is Ralph Kiner, who, in another 1950's Cubs tradition, became a member of the North Siders long after he was good. Four years after this photo was taken, Kiner was acquired by the Cubs in a 10-player deal (huge deals like that were popular in the '50s) -- none of the other nine did anything significant.

Kiner had serious back trouble by then and though he hit 22 HR in his one season as a Cub, he was sent to Cleveland after the season. The Cubs got Sam Jones in return -- and in 1955, he threw a no-hitter for the Cubs, the team's first no-no in 38 years.

In the 1950 All-Star Game, won by the NL on Red Schoendienst's HR in the 14th inning, Kiner played the whole game, going 2-for-6, and Pafko came into the game in the fifth, going 2-for-4.

Pafko will be 89 in a month; in another year he'll join this list of all living former major leaguers who are older than 90. The oldest living former Cub is Freddy Schmidt, who will be 94 next month and who pitched in one game for the 1947 Cubs.

The oldest living former Cub of any significance is Phil Cavarretta, who will be 94 in June.