With the 25th Annual Cubs Convention kicking off today, I thought I'd post a photo of a Cubs Hall of Famer who is at every convention and who wore a Cubs uniform for more total seasons than anyone (31 years combined as player and coach), and one of my personal childhood heroes for the classy way he played the game, Billy Williams. 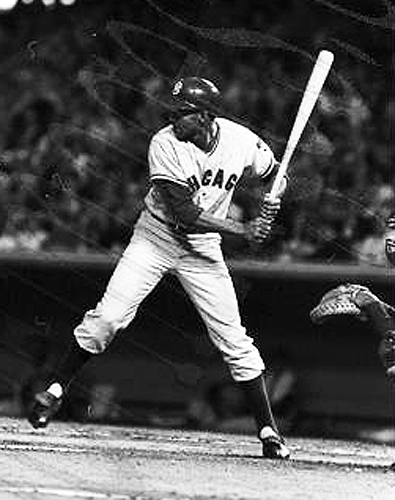 This photo was taken on July 15, 1965 at Dodger Stadium. The Cubs got shut out on three hits by Don Drysdale, 5-0. Billy had one of those hits, a first-inning single. He also drew one of the three walks Drysdale issued.

The '65 Cubs were a peculiar team. Even in that low-offense era, they had three 100-RBI men (Williams, Ernie Banks and Ron Santo, ranking fourth, sixth and seventh in the National League) and Santo and Williams hit 30+ home runs, ranking third and fourth in the NL. Billy led the team in both categories with 34 and 108. The rest of the Cub offense, though, was pathetic -- they scored 635 runs, seventh in the league, and the pitching staff's 723 runs allowed was second-worst, resulting in a 72-90, eighth-place finish. This resulted in them being shut out 18 times, two of which were no-hitters, the second of those being Sandy Koufax's perfect game on September 9, still the last time the Cubs have been no-hit.

At this time, Billy was in the middle of his consecutive-game streak which eventually reached 1117 games in 1970 before he took himself out of a September game that year, saying the streak had gotten to be too much for him. The Cubs played 164 games in 1965 -- they had two ties, the first on Opening Day, April 12, a 10-10 monstrosity with the Cardinals, the other the second game of a DH with the Mets on May 31, both called for darkness. Under the rules of the time these games had to be made up in their entirety later -- both were -- but since they had both gone more than five innings, all the stats counted.

Thus Billy Williams played in 164 games in 1965 (so did Ron Santo), which stands as the Cubs' team record. Only Maury Wills -- who played 165 games in 1962, all the regularly scheduled ones plus the three-game playoff with the Giants, which counted as regular season games -- played more in a single season. Since current rules require suspending tie games that could be called for rain or other reasons rather than calling them ties, and playoff tie-breakers are now single games rather than three-game series as they were before 1969, these records will never be broken.

Finally, Billy batted third in every game but three in 1965 -- in a couple of late-May games he batted second.