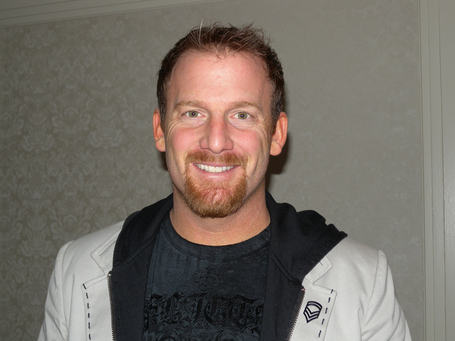 Finally got that shot of Ryan Dempster I'd been looking for. Demp is a class act and ready for a big season in 2010. I did a long-form interview with him which will be posted soon.

The biggest news from this year's Cubs Convention is... that there really is no huge, breaking news. With a near 24-hour news cycle covering every single development about our favorite team, with breathless tweets being dissected on this site and others day and night, there was almost nothing to be revealed this weekend that wasn't already known.

Now, follow me after the jump for some more information about what may be the most contentious issue discussed all weekend -- spring training.

Here's what I know as of this evening: there is general agreement, between fans and management, that the Cubs need an upgraded spring training complex (one where players wouldn't have to travel half a mile down the road between the minor league fields and the major league fields, as is the case now). Kenney reminded everyone that the facilities in Arizona are now in use 11 months a year for things like extended spring training, the AZ rookie league and the AZ fall league. That's what they need and intend to keep. He specifically mentioned the Goodyear Ballpark, the new Reds and Indians facility, as the type of place they want (though I also know they have visited Camelback Ranch, new spring home of the Dodgers and White Sox, considered to be the new jewel of the Cactus League).

Both Kenney and the Ricketts family, when asked about the years in Mesa, said that the 57 years training in Arizona does mean something, and I do not believe that was mere lip service. They know how many Cubs fans live or winter in Arizona, and that includes people who work for the team now. They are well aware of what appears to be overwhelming fan sentiment at the convention (mirrored by the 68% who voted "Arizona" in the poll I posted in this December interview with Mesa Mayor Scott Smith) for remaining in Arizona.

What I believe is going to happen is that soon -- possibly as soon as next week, though it could be later (although not much later -- the Cubs must give notice by the start of this year's spring training if they intend to opt out of their current ST deal) -- the Cubs will announce that they are going to continue in Mesa. For their part, the city of Mesa has stated, earlier today via tweet from Mayor Smith, that they intend to do what it takes to keep the Cubs:

To remove ALL doubt: Mesa proposal to Cubs will build new stadium and training facilities that are best in all of baseball!

And that, really, is what it's all about. The two new complexes I mentioned above, plus other new Arizona ST ballparks like the one in Surprise and the one in Peoria, are shared by two teams. The Cubs are the engine that drives the Cactus League, and as such should have a similar complex all to themselves.

Based on that comment by Mayor Smith, they'll get it. In Mesa. To paraphrase something we say here often, GETITDONESCOTT!!!

Here are a couple of photos from Saturday's panel discussions (yeah, I know, they're a little dark. Flash didn't quite work as well as I had hoped.) 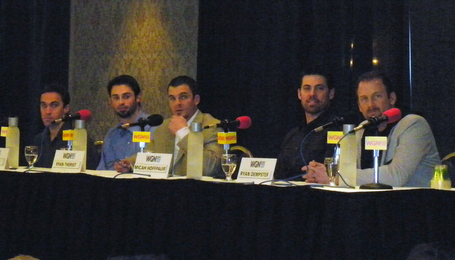 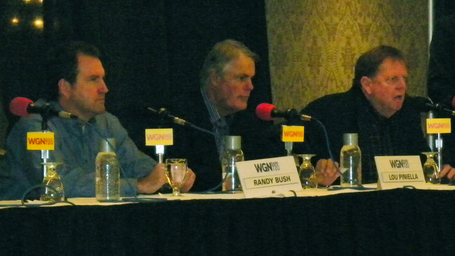