Share All sharing options for: Cubs Historic Photos: 12th In A Series

This is (or at least, it should be) a familiar face to you. But do you remember when and where the Cubs wore these uniforms? 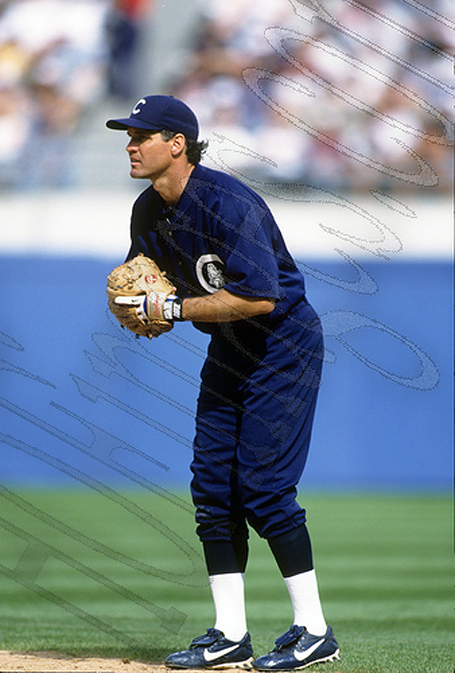 That is, in case you didn't recognize him, Hall of Fame second baseman Ryne Sandberg. The Cubs wore these throwback uniforms only once -- for the very first interleague game played in Chicago, vs. the White Sox on the South Side on June 16, 1997. The White Sox decided to wear their 1917 World Championship uniform, so the Cubs countered with this all-navy road uni. It was the Cubs' road uniform for only two seasons, 1911 and 1912.

Sandberg was in his final season; he didn't have a very good year, but that day vs. the White Sox he went 3-for-5 with a double and two runs scored. The Cubs weren't very good as a team, either, in 1997 -- you probably remember the 0-14 start -- but that day they beat the White Sox 8-3, and particularly satisfying must have been defeating ex-Cub Jaime Navarro. The White Sox had considered signing free agent Roger Clemens, but thought he was washed up (to be fair, a lot of people thought that) and signed Navarro instead. Whoops.

True story: I was at this game, and sat near some Sox fans discussing interleague play, which was then a novelty. I asked them if they would be rooting for the Cubs when they played their division rival, the Indians, later in the year. They looked at me as if I had just asked them to have a root canal right there in the ballpark. "Oh, no! Never!" I just shook my head.

Remember, if you want a color print (without watermark) of this photo, contact Leo Bauby at this email address.