Share All sharing options for: Cubs Historic Photos: 16th In A Series

Both of the players in this photo should be familiar to you. Go past the jump to find out when this photo was taken. 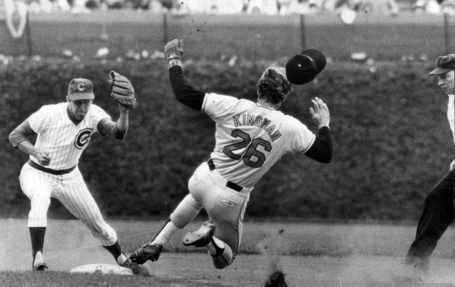 Longtime Cub shortstop Don Kessinger is getting ready to tag Dave Kingman out on this play. But just what kind of play was this? Is it a forceout or an attempted steal?

Your first clue is the numbering style on the back of the Giants uniform. The Giants changed from all-black letters and numbers to what was an orange surrounded with a black outline in 1973. Kingman was traded to the Mets after 1974, so it has to be either '73 or '74.

Although Kessinger and Kingman are both wearing long sleeves, the umpire isn't, and neither are the people visible in the bleachers. So this has to be a warm-weather game; also, you can't see any shadows, so it has to be a game played on a cloudy day.

We can thus eliminate a series in April 1973 (too cold) and May 1974 (Kingman didn't reach base in that series). We can also eliminate the August 1974 series. In two of those three games, the only time Kingman reached base safely were via solo home runs, and in the other one, he entered as a pinch-runner and stole home (!).

So it has to be either July 21, 1973 or July 22, 1973. In the July 21 game, Kingman hit a solo homer and reached base one other time; he was erased on a double play in the eighth inning. But that play at 2B was made by second baseman Glenn Beckert, not Kessinger.

The July 22 game log gives us the answer. In the second inning of that game, Kingman was caught trying to steal second base. Kingman had stolen 16 bases in 1972 (that ranked 13th in the NL) and apparently fancied himself a base stealer. He never again stole more than eight in a season. The Cubs lost that game 4-1 in 13 innings, despite 12 innings of four-hit ball thrown by Fergie Jenkins.

This photo is from a new series that I have received from Leo Bauby. They come from the vast Sun-Times photo archive, which you may have read was recently sold. If you would like to buy the original photo, it's available on eBay, along with a number of other Cubs photos (and other Chicago-related photos). Search for the seller name "suntimesphotoarchive".