Cubs Near Agreement To Stay In Mesa For Spring Training

Mesa, Arizona's City Council is about to approve a package for the Cubs to remain there for spring training.

Share All sharing options for: Cubs Near Agreement To Stay In Mesa For Spring Training 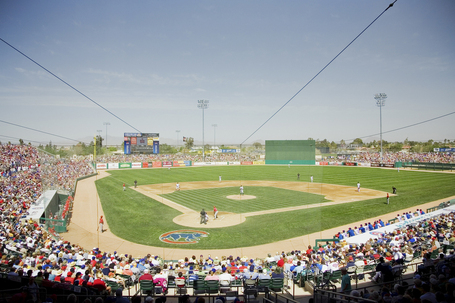 The Cubs, as noted in van Dyck's article, aren't making any formal announcement at this time, but after the jump, I have some more details.

UPDATE! More details from the (Mesa) East Valley Tribune, including a PDF of the Memorandum of Understanding that will be signed between the city of Mesa and the Cubs.

The agreement will include a combination of public and private money for the complex to be built in the Longbow area of Mesa. Further details on the exact site location will be revealed at the Mesa City Council meeting on Monday, when this agreement will be approved, giving Mesa exclusive negotiating rights while they finalize the financing. The public portion of the money is subject to a public vote, which is also expected to be approved.

I hope to have more details and possible photographs of the area in the next few days. It's no secret that I've been strongly in favor of the Cubs remaining in Arizona for spring training and laid out my case in this post last month and also in this exclusive interview with Mesa Mayor Scott Smith. Presuming it all comes together the way I understand it -- and I don't see any reason it won't -- the Cubs will be in Mesa, Arizona for spring training for many years to come.