Share All sharing options for: Cubs Historic Photos: 17th In A Series

Ah, the braintrust -- a Cubs manager and his coaches, no doubt plotting important strategy for an upcoming game.

Go past the jump to find out who these fine men are and when this photo was taken. 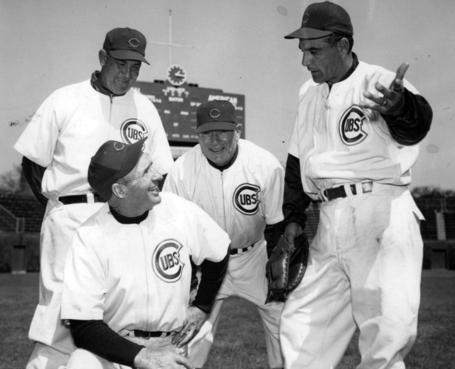 Obviously, there is no clue on this photo as to when it was taken, other than the uniform, which doesn't really narrow it down very much -- this style of uniform was worn from 1948 through 1956. Neither does the scoreboard -- the board looks basically the same as it did until it was reworked for the 10-team leagues in the early 1960's (incidentally, I learned yesterday from Cubs unofficial historian Ed Hartig that the original color of the board was a reddish-brown. It was repainted in its now-familiar green in 1944). Check out, also, the zippered front of the jersey -- the Cubs were the first major league team to have zippered shirts. (And the first to give them up, too.)

The latter two both had distinguished Cubs careers and played in multiple World Series (four for Root, three for Cavarretta). So how did this group do in leading the Cubs? The information given to me with this photo indicates it was taken on April 21, 1953.

The 1953 Cubs finished 65-89, in seventh place. Cavarretta was fired just before the 1954 season for being honest with P.K. Wrigley -- P.K. asked him how the '54 team would do and Cavarretta told him "we're a second division club" (the phrase "second division", now in disuse, referred to a team in the bottom half of the standings in the pre-divisional play era).

You can buy the original photo on eBay; search for photos from seller "suntimesphotoarchive". There are many Cubs photos as well as other Chicago-related photos.