Share All sharing options for: Cubs Historic Photos: 18th In A Series

There are few clues on this photo as to when it was taken; and unless you know who the players are, you probably can't guess. Follow me past the jump to find out about this photo from Cubs history. 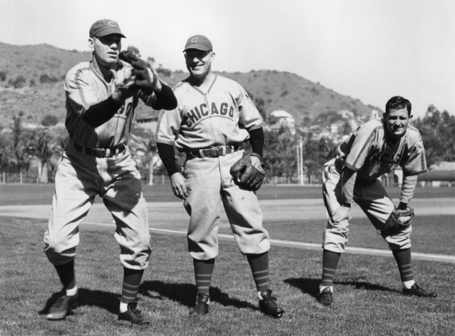 There are two well-known players here; the third (at right) is Jack Russell, who pitched two seasons for the Cubs after a long (and not very good) American League career with some really bad Red Sox and Senators teams.

At left is Dizzy Dean, who was trying to resurrect his career after a serious injury suffered in the 1937 All-Star Game. Traded to the Cubs before the 1938 season, he pitched sparingly that year (and went 7-1 with a 1.81 ERA, but could no longer throw hard -- he struck out only 22 in 74.2 innings) and got pounded by the Yankees in his one 1938 World Series start.

Charlie Root is in the middle of this photo; Root had a long and successful career with the Cubs, pitching in four World Series. He still holds the Cubs' career pitching record for victories with 201.

This photo was taken on Catalina Island off the coast of California during spring training in 1939. The Cubs trained there from 1926-1951.

Once again, you can buy this photo and many other Cubs and Chicago-related historic photos from Leo Bauby on eBay. Search for items sold by seller "suntimesphotoarchive".