Share All sharing options for: Cubs Historic Photos: 19th In A Series

There are two Hall of Famers in this photo. One should be fairly easy to identify. The other, perhaps not... but give it some thought and you should be able to make the connection. Answers after the jump. 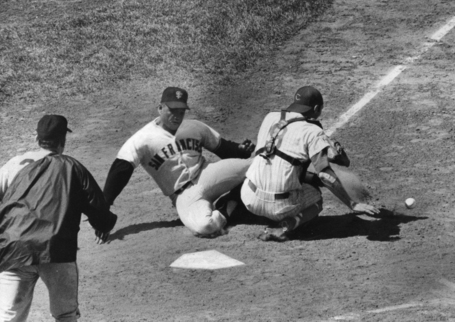 There are almost no clues in this photo as to the date it was taken, particularly if you have identified the two Hall of Famers. I figured it would be pretty easy for you to ID Willie Mays, who is sliding in safe at the plate as the ball arrives late to Randy Hundley.

Looking at the other man in the photo, he's wearing a jacket -- that likely makes him a pitcher, and that should have given you the obvious clue, even though his number is only partially visible. It's Gaylord Perry; he and Mays were Giants teammates from 1962-1971.

That fact would have made it nearly impossible to sleuth it out, so let's use other clues. The presence of Randy Hundley at catcher narrows it down to 1966-71. Gaylord Perry started 10 games at Wrigley Field in those six seasons. The shadows and the short sleeves worn by Hundley eliminate two early-season games; Mays didn't play in two of the other eight, and of the six now remaining, Mays didn't score a run in two of them.

Now, we eliminate June 6, 1970, because the run Mays scored that day was on a two-run homer, no reason to slide. Same for his run on September 20, 1967; scored from first on a triple. Mays could have made a slide to score on July 22, 1967 -- but his run was in the top of the eighth inning and Perry didn't start that game, he came in the game in relief in the last of the eighth, so he'd have been in the bullpen at the time.

That leaves one game and two possible runs scored, both on sacrifice flies, on July 29, 1968. The Giants won the game 4-1. The first run Mays scored in the second inning tied the game at 1; the second was the fourth and final run of the game. I'm going to go with the latter; it's a late-July game and the angle of the sun appears to make it a bit later than the then-1:35 pm game time. Perry threw a two-hitter that day; Don Kessinger got both hits.

Remember, you can buy this original photo and many other Cubs and Chicago-related photos from Leo Bauby on eBay -- search for seller "suntimesphotoarchive".