The Long And Winding Road On Its Way To Wrigley? Paul McCartney Concert Possible This Summer

Share All sharing options for: The Long And Winding Road On Its Way To Wrigley? Paul McCartney Concert Possible This Summer 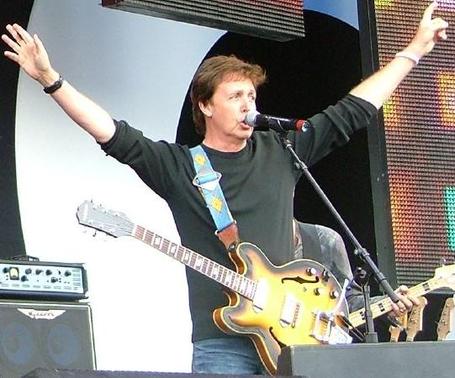 This is completely unconfirmed, but sources tell me that the Cubs are working on three possible concerts at Wrigley Field this summer. Under consideration are Paul McCartney, the Dave Matthews Band, and Phish.

Maybe I'm showing my age, but I'd be absolutely thrilled to see Paul McCartney live at Wrigley. I'm too young to have seen the Beatles in person, but I love Beatles music and have seen McCartney twice in concert at the United Center (once in 2002, again in 2005).

The Dave Matthews Band and Phish -- well, I like their music, but don't know if I like it enough to see more than one concert at Wrigley this upcoming summer. I know a lot of people here are DMB and Phish fans and would be excited to see them there.

As noted, I have no confirmation of this, nor any dates. Speculation: given the dates of previous concerts at Wrigley (all in July), the most likely dates for these shows (presuming they do happen) would be from July 5-14, when the Cubs are on a road trip to Arizona and Los Angeles, followed by the All-Star break. Perhaps not coincidentally, U2 will be in Chicago at Soldier Field on July 6 -- Bono and McCartney have done shows together before. Wouldn't it be cool if they appeared at each other's shows?

More info as I get it.

UPDATE: Here's more info via the same source from which I got the original info. More possible dates: May 31-June 10, while the Cubs are on the road in Pittsburgh, Houston and Milwaukee. That would match up with the Phish dates mentioned in the comments.