Cubs-Mesa Spring Training Deal: "Win-Win" For The Team And Arizona

More reasons the Cubs will be a big winner by staying in Mesa for spring training.

Share All sharing options for: Cubs-Mesa Spring Training Deal: "Win-Win" For The Team And Arizona

Sometime in the next five years, if all goes according to plan, Cubs fans attending spring training games in the new spring training complex that will be built based on the preliminary plan approved by the Mesa City Council last night will look out from their seats and see the beautiful mountain vista (pictured above) beyond the outfield berms. (It'll look better in the bright sunshine of March; these photos were taken last weekend, on a partly sunny January day.)

Among other things before last night's unanimous 7-0 Mesa City Council vote in favor of the plan, a resident serenaded the council with "Stay Cubs Stay", his own personal version of "Go Cubs Go". (I listened to it online. It was cute for a line or two, but eventually it was, "Get on with it already!")

I've made no secret of my belief that the Cubs belong in Arizona for spring training, not just because of their long history there and the deep connections that many Chicagoans have in the Valley of the Sun, but because I firmly believe that Arizona is the best place for spring training. This would seem to be confirmed by the fact that since 2003, five teams have fled Florida spring training for Arizona, lured by better weather, easier logistics and state-of-the-art training facilities.

Here's a timeline of events leading up to last night's vote.

Assuming all goes according to the plan, the Cubs will get one of those; there's a more detailed description of what's going to be built and how it's going to be paid for here. There were Mesa residents at last night's council meeting who railed against using "our money" for a private business, but that's not how it's going to happen. A large chunk of the money to be raised will primarily be from increased rental-car taxes -- generally not paid by local residents -- and a $1 surcharge on every Cactus League ticket sold, something that's not unreasonable considering that Cubs fans make up a substantial minority of fans at Cubs road spring games in Arizona.

It is indeed, as the linked article above says, a win-win. There will be a substantial sum of money spent to build the facility and the "Wrigleyville West" complex of hotels, restaurants and residences. However, with the jobs and taxes that will be generated by those facilities, the original investment should be returned to Mesa and Maricopa County many times over; the deal will keep the Cubs there for at least 25 years after it opens (likely to be no earlier than 2014). There are financial benefits for both Mesa and the Cubs in this deal -- anyone who doubts that should read the Memorandum of Understanding that was approved last night (link opens .pdf).

The Cubs will be happy to have a top-notch facility that they share with no other team; they'll be happier to not have to travel more than 45 miles to anyone else's spring training stadium, and they should be happiest to have the virtually guaranteed good weather and unlimited sunshine that March springs in the Valley bring almost every year. Some say that the altitude and thin air makes it more difficult to evaluate players; while there may be something to that, many players work on things unlike what they'd do during the regular season in spring training and I'd think any good manager could adjust for that.

There was in the last few weeks a comment made that "16 of the last 19 World Series winners trained in Florida". Well, since 2001 three of the nine (Diamondbacks, 2001; Angels, 2002; and White Sox, 2005) have come from Arizona spring camps -- about what you'd expect given that until 2003 only one-third of all teams trained there. Further, the 2002 Giants and 2007 Rockies also made the World Series within that nine-year time frame.

Soon, the Cubs will make yet another Arizona-trained team to win the World Series. Here are two more photos of the views Cubs fans and players will have from the new stadium site and practice fields: 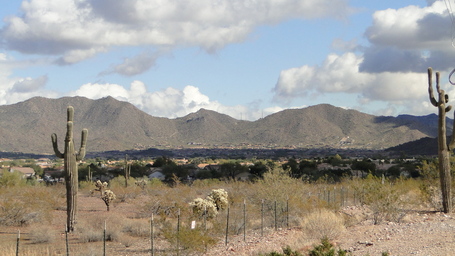 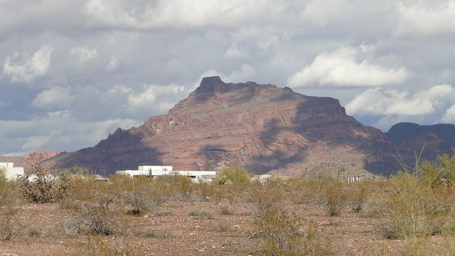