Share All sharing options for: Cubs Historic Photos: 20th In A Series

One player in this photo became famous, not long after it was taken, for something off the field. But exactly what is happening here is somewhat of a mystery. Follow me after the jump for the story. 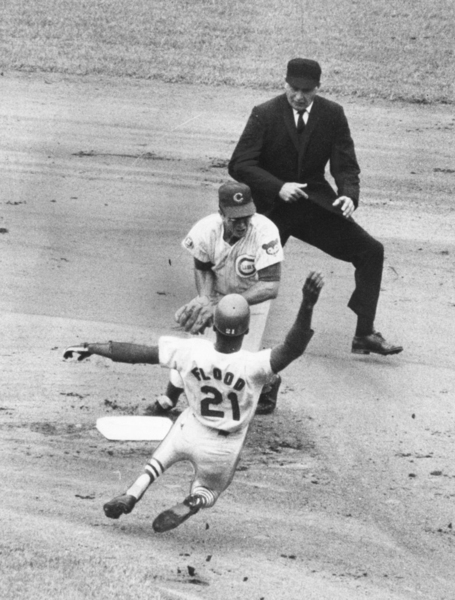 The player I'm referring to, obviously, is the Cardinals' Curt Flood, who, after being traded to the Phillies after the 1969 season, filed suit against baseball, claiming he couldn't be treated as property and dealt against his wishes. The suit eventually reached the Supreme Court in 1972; you can read the entire Supreme Court opinion here. They upheld baseball's anti-trust exemption -- something Congress keeps saying they're going to get around to revoking, but they never do. Incidentally, that opinion is famous in judicial circles for another reason -- Justice Harry Blackmun, a huge baseball fan, was assigned to write the majority opinion and put over seventy names of baseball greats from the past into it.

Now, about the photo: your first clue is the right sleeve of Glenn Beckert. What's that patch? It's the Illinois Sesquicentennial patch, worn for the 150th anniversary of Illinois statehood in 1968 by Chicago sports teams. (I also especially like the umpire in this photo -- remember when they wore shirts and ties?)

So, now we know the photo was taken in 1968. The Cardinals played nine games at Wrigley in 1968 and Flood played in all of them. The short sleeves eliminate the two April games, and Flood didn't reach base in one of the four August games. In two of the other three August games, when Flood reached base once, he was stranded at first. In the other, he advanced on a wild pitch, unlikely to have resulted in a photo like that one.

We're left, then, with June 28, 29 and 30. On June 30, Flood reached base once on a single, but advanced to second on an error -- again, no photo like that could have resulted. On June 29, there's a possibility in the first inning, after a Flood single, he was erased on a double play, but that doesn't look like a DP pivot.

Remember, you can buy this photo and many other Cub and Chicago-related photos on eBay; search for items from seller "suntimesphotoarchive".